This tribe conducted five ceremonies that were of distinct religious character. A very influential portion of them were intended to amuse as well, and they differed greatly by theme, but were very similar in their initiation and delegation. These ceremonies were executed by a member of one of the companies. “While all men whose age lay between certain limits had the right to perform the ceremony appropriate to that age, they were organized, not in one company, but in several, each one of which gave the ceremony without the assistance of any of the others; and a company had the right to perform the same ceremony more than once.”

A man would feel a vow to perform a ceremony in return for the recovery of a loved one from illness, or the preservation of his life in the midst of peril. This man would select an elder man who would have charge of the ceremony. Then, each man of the company would select an elder man, to be known as his “Grandfather.” The Grandfathers would paint the dancers and the dancers’ wives, and every night they would leave camp to observe certain rites by which the old men rendered their medicine to the dancers.

In the dance of the Fly Society which lasted one day, the performers were made up of four tiers. There were leaders, the pledger, four “elder brothers,” who were members of companies that already gave the Fly Dance, and finally, the rank and file of members. They were identified by different garments and body paint.

The Grandfathers were to chew an herb which would make the dancers brave and strong as it was rubbed all over them. Around noon, the members of the society assembled in their lodge and filed out, making circular movements around the encampment. They would start to dance, holding their robes outstretched, in a wing fashion, and made humming noises as if they were mosquitoes. At the close of the dance, the dancers all fell to their knees in a circle, and bowed their head to the ground. When the dance ended, the Flies were free to spend the next two hours pursuing all bystanders by poking them with their long sticks with a cactus prick at the end. After this, they gathered in the center of camp and ran four races, then shifted to a time of feasting on meat, which one of their company’s members had prepared.

If a man vowed to conduct the Crazy Dance, he took a pipe to an old man who was familiar with its performance. If the old man accepted the pipe, he became the “Maker of the Crazy Dance.” The members of the company chose Grandfathers to them as they did with the Fly Dance. In this dance, every member of the company was expected to participate.

They were dressed in robes with holes cut near the top where their head came through, like a poncho. There were two loose strips of the robe that hung down from their shoulders which ended in feathers and claws of an owl. They were painted yellow to the knees and elbows. They carried bows and arrows to which crow feathers were attached, and whistles made of eagle wing-bones. On their head, one side was covered with clay, the ears stuffed full with a spongy fungus, and an owl head was worn off the right temple. They carried four-foot staffs, and hung from them were hoofs and claws of various animals.

The ceremony lasted four days and four nights. The dancing continued until darkness, when the dancers’ wives followed the Grandfathers beyond the camp circle to receive medicine from them. As they returned to the lodge, they were kissed by all the dancers, and the wives’ husband would then kiss the Grandfather. 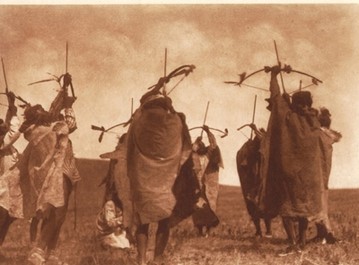 In the mornings, everyone gathered in the lodge. The dancers’ wives took their places behind the Grandfathers and the dancers marched around the lodge, then stopped until the singers commenced. The dancing went on all day, and each time the singing began, the principal Grandfather arose, and then all others joined. On the fourth day there was a fire kindled in the center of the lodge. Grandfather would say “it is time for the Crazy men to dance in the fire.” This meant the dancers must dance on the glowing embers of the blazing fire. They all leaped on the coals until every ember was extinguished. Following that, all the dancers ran outside to discharge their arrows straight up into the sky above them. Each one stood their motionless, in bravery, among the falling shafts.

The Crazy men were free to play pranks and do mischievous actions until nightfall. They would go around shooting people with blunt arrows, saying the opposite of what they meant, and doing the opposite of what they were told. For others, the only refuge one could seek was behind one of the Grandfathers. The ceremony ended on the fourth day as darkness fell upon the tribe.

The Dance of the Fox Society

Following this dance was always the removal of the camp to a new location. As like other dances, it was initiated by the man who had promised its performance. He would seek the help of an old man, and each man of the company would select a Grandfather. This dance, much like the Crazy Dance, lasted four days and four nights, with the dancing taking place during the daytime. Four members of each company carried around a seven foot staff, bent like a shepherd’s crook. These men were of known bravery and were supposed to never leave the grounds in which they planted their standards.

A chosen virgin was chosen to represent the Fox Mother, who’s supposed children were the dancers. The members of the dance entered the lodge and seated themselves in two rows, one on each side of the lodge. A staff-bearer sat at each end of the row, and the Fox Mother was seated behind the dancers who formed the end of the southern row. The man who initiated the dance slept between the two rows near the door. The dancers danced in a circle and moved to the left while the Fox Mother danced in the opposite direction around the perimeter of the circle.

On the last night, relatives of the members of the company brought gifts to the Grandfathers. Early the next morning, the encampment would move to new grounds. Before reaching the new campsite, they halted about halfway when the dancers gained some distance on the gifts which had been received. The warriors charged upon the heap of gifts, selecting from it an article similar to something he had captured in battle.

The Dance of Dog Society

The principal features of this dance resembled the ceremonies of the other societies. In this ceremony, there were two leaders, one wearing a red shirt, and the other yellow, both lined with crow feathers. The other members wore a red cloth over one shoulder and under the other, with the end trailing on the ground. Their robes, and them, were fixed by a staff which was thrust into the ground. The warrior was not permitted to move until someone, a non-member, drove him away, speaking to the member as if he were a dog.

Each Dog Dancer carried eagle-bone whistles and small wands made of deer hoofs, and they all wore eagle feather headdresses. The dance lasted for four days and took place in a large lodge.

The Dance of Drum Society

This ceremony was performed by the bravest men, which were the most experienced warriors in the tribe. This ceremony also lasted four days and four nights. There were four leaders who had crooked staffs wrapped with sacred white buffalo skin. All were painted red and white with dots representing hail and with zigzag lines for lightning. They wore only a loin cloth. “They possessed a drum which, if the dance had been performed a short time before, they might in battle throw towards the enemy. The members then ran to it and stood there fighting, until either the enemy gave way or they themselves were killed.”