There are many parallels in the lives of Vincent Van Gogh and Edward Sheriff Curtis.

As with many before, their genius was not understood in their time. Van Gogh painted the dynamics of physics in the energy of his brush strokes, and Curtis captured what others dismissed and denigrated when he recognized the import of documenting a “vanishing race”.

Not just an American history, but a contribution to world history, in understanding an indigent people. 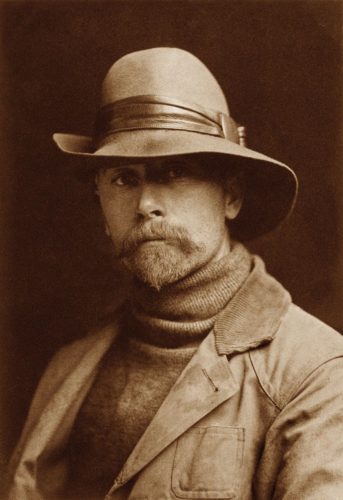 A collector of Edward S Curtis is a steward of great art.

Recognize the command Curtis had over artistic elements brought to the work!

His intentional study of photography made him a cutting-edge and recognized pictorial documenter, with a developed eye for creating compositionally balanced photographs. Attention to lighting detail is expressed in his studio work with subjects engaged in such a way as to expose an interesting portrait.

In the larger scale of his new endeavor and environment he was able to translate an extension of the studio talent onto wide-open spaces with uncooperative aspects of nature. His intuition and psychological awareness to create connection with his Indian subjects, who selectively allowed him to capture cultural character, engaged them in the story to reveal their culture and proud heritage with visual interest.

A collector of Edward S Curtis is a steward of critically important history.

From the inception of his work, his story captures excursions to Alaska, meetings with financial tycoons, royalty, early cinematic and audio dabbling, and the never-ending marketing genius to raise capital for a nineteenth century start-up. The value of knowing the right people shows up with the influence of a Famous American Explorer and an American President, both of whom recognized his talent for preserving natural beauty. Their admiration translated into encouragement of a young photographer; who would spend thirty years sacrificing family, fortune and comfort; for the recording of The North American Indian.

An Opportunity to become a steward and collector of History and Art:

Valley Fine Art in Aspen, Colorado has an opportunity for you, as collector.

Upon its completion in 1930, the work, entitled “The North American Indian”, consisted of 20 volumes, containing 1172 hand-pressed photogravures and 4000 pages of written text.  Each volume was accompanied by a corresponding portfolio containing at least 36 large photogravures in each portfolio, 722 in total.