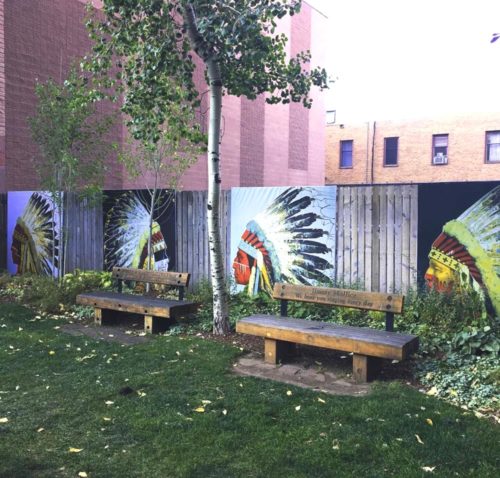 “In our second year of Shining Mountains Film Festival, we are so excited to add a long list of free community events to our (already announced) film lineup,” says Wheeler Opera House Executive Director and Festival Producer Gena Buhler. “We are so thrilled to have so many amazing partnerships that will help enhance Shining Mountains for the community and our native guests as we make the festival an important part of Indigenous Peoples’ Day in the Valley.”

Join us for a day of storytelling, dancing, songs, and more! This free event is family-friendly, and the perfect way to kick off a weekend honoring Native American culture and history.

Among the Ute, the sweat lodge ceremony is perhaps the oldest of all ceremonies. 13 Moons Ranch is located at 6334 Hwy 133 (5.2 miles south of Carbondale City Market on the left hand (east) side). Park on the open space and walk down towards river on left where you will see the Lodge.

Please come with appropriate clothing for both the ceremony, and after.  Please bring a dish and/or beverage to share for our post ceremony feast. Please no dogs allowed at our ceremonies. To honor Lakota tradition women who are on their “moon time” are asked to not participate in this ceremony. More information or questions, visit aspenutefoundation.net

Join CJ Bradford from the Ute Indian Museum (Montrose) for a one hour discussion of current day pow wow dances.

Native American arts and crafts will be showcased in the Wheeler Parcel, hosted by the Ute Indian Museum.

Native American arts and crafts will be showcased in the Wheeler Parcel, hosted by the Ute Indian Museum.

Throughout the month of October, artwork by artist Andrew Bolam is being showcased on the Wheeler Parcel in honor of the festival. Bolam is an English born artist whose work has followed a broad and intuitive path over the last 17 years focusing on the American West.  A portion of the proceeds from Bolam’s art sales supports various reservation projects.   His original work can be seen by visiting the Valley Fine Art gallery, located on the ground floor of the Wheeler Opera House building.

Movement and Meaning: Carrying on the Tradition

Eva Kaukai and Manon Chamberland practice the Inuk art of throat singing in their small village of Kangirsuk. Their mesmerizing voices carry through the four seasons of their Arctic land.

This short follows Rebecca Thomassie, an Inuk woman, around Kangirsuk as she learns the 52 Inuktitut words for snow.

A story about Sean and Adrian, a Two-Spirit couple determined to rewrite the rules of Native American culture through their participation in the “Sweetheart Dance.” This celebratory contest is held at powwows across the country, primarily for men and women couples, until now.

This film tells how a young man changes his life from drugs and alcohol to become a traditional dancer.

Carrying on the Tradition (Canada 2017)

Nimki is a young dancer from Wiikwemkoong. He has struggled with depression until traditional dancing reconnected him with his culture, his family, and himself.

The film is the story of mothers and daughters fighting for indigenous rights in the American Indian Movement of the 1970s. The film unveils not only a female perspective of history, but also examines the impact political struggles have on the children who bear witness.

$2 per ticket to this program will be donated to the Madonna ThunderHawk’s Wasagiya Najin “Grandmother’s Group” on the Cheyenne River Reservation which assists in rebuilding kindship networks and supporting the Nation in its efforts to stop the removal of children and build local resources to handle it themselves.

Words from a Bear

That is All (United States 2018, directed/produced by Anna Robins, 19 mins)

This film by Anna Robins covers the beginnings of visual, Lakota artist, Dwayne Wilcox. From his family ranch on the Pine Ridge reservation, Dwayne discovered his love of drawing using available materials which led to his signature ledger-art style. Influenced by his culture, the unique humor found in his small community, and the events that shaped national and local history, you will see the stories jump from the page of Dwayne’s work. Hop in the car and drive through the reservation to see how the success of Dwayne Wilcox unexpectedly came to be.

Journey into the mind and soul of Native America’s most celebrated author of poetry and prose, Pulitzer Prize winning author Navarro Scott Momaday. Words from a Bear visually captures the essence of Momaday’s writings and storytelling, relating each written line to his unique Kiowa/American experience representing ancestry, place, and oral history.

Battles over blood quantum and ‘best interests’ resurface the untold history of America’s Indian Adoption Era – a time when nearly one-third of children were removed from tribal communities nationwide. As political scrutiny over Indian child welfare intensifies, an adoption survivor helps others find their way home through song and ceremony.

Shining Mountains Film Festival is a documentary film festival produced by the City of Aspen’s Wheeler Opera House, in partnership with Aspen Film and Aspen Ute Foundation, focused on fostering Native American and indigenous peoples’ storytelling through film and live events in a way that supports and engages indigenous media arts; authentically captures national and international indigenous voices; highlights the work of indigenous filmmakers and performers for diverse audiences; and breaks barriers of racism by replacing stereotypes with credible representations of indigenous peoples’ history, culture, and community.

Since 1889, the Wheeler Opera House has been Aspen’s community performance venue and has become the Roaring Fork Valley’s premiere site for concerts, movies, festivals, lectures, community events, opera, and more. In recent years, the Wheeler has been a leader in producing exceptional festivals in Aspen, celebrating the comedy arts, global issues, and the craft of songwriting.

Established in 1979, Aspen Film is one of Colorado’s most active film arts organizations, presenting dynamic programs and featured guest artists throughout the year. Internationally recognized, Aspen Film organizes a major film event in every season, along with an extensive education program: Aspen Filmfest, Academy Screenings, Aspen Shortsfest and Film Educates. With a mission to enlighten, enrich, educate and entertain through film, Aspen Film stimulates thought, encourages dialogue and broadens understanding of our world and selves through the diverse spectrum of ideas presented by filmmakers worldwide. To learn more, visit aspenfilm.org.

An American Indian Cultural program based in Aspen, CO the Aspen Ute Foundation facilitates the physical and spiritual reconnection of Native American Indians, with an emphasis on Utes, to their ancestral lands in Aspen and the Roaring Fork Valley as well as bring awareness to Indigenous cultures/traditions and struggles.