Offered for Sale at VFA 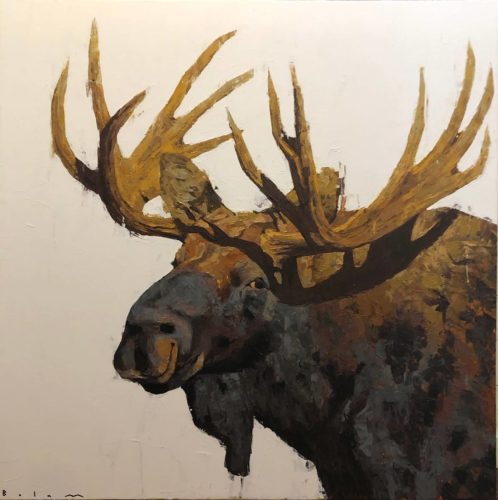 When an artist loves his craft, and creates for the joy of it, their relaxation and happiness radiates from their work. Painter Andrew Bolam would be the first to tell you that he paints for himself. “I’m excited that I’ve given myself the luxury of growing organically and doing whatever tickles my fancy,” he said in a recent interview with Southwest Art magazine [LINK to https://www.southwestart.com/articles-interviews/emerging-artists/emerging-artists-andrew-bolam] The best artists know how to listen to their inner impulses and inspiration and to let their art grow in that direction. Bolam’s artwork has developed through the years from his early-career detailed landscape paintings to his current inspiration: 40 x 40 or larger acrylics of Native Americans and western wildlife. Valley Fine Art, in downtown Aspen, Colorado, is pleased to offer a handsome representative of that present group, “Atticus,” for sale.

Bolam has chosen a stately name for his distinguished moose, “Atticus,” and has given his subject plenty of room to introduce himself—the piece measures large and square, 48 x 48. White space and silhouette feature prominently in Bolam’s current series, and Atticus wonderfully represents that style. Standing alone against a white backdrop, one might wonder if Atticus himself had arranged to sit for the portrait at the artist’s studio. Bolam explained, “I’m happy to allow a lot of negative space in my work and seemingly empty areas of canvas.” Posing with the sun on his back, Atticus cocks his head knowingly at the painter, and, is he smiling? Andrew Bolam might be the first to admit, he and Atticus are having a great time.

Pop into Valley Fine Art to meet “Atticus” and other works by noteworthy western artists.