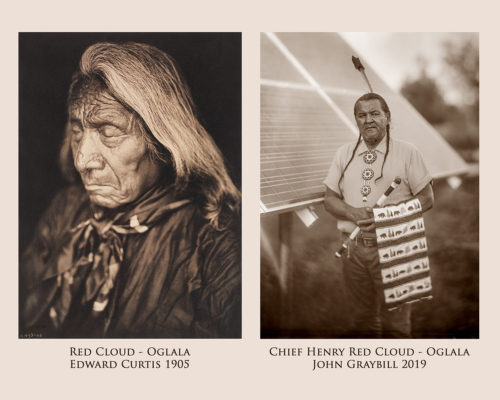 Aspen is home to the most thorough collection of Edward S. Curtis photographs in the West. This unique and rare collection is a draw for collectors and historians alike. Mark your calendars for February 14 and 15 at 5 pm, when Valley Fine Art will host Edward S. Curtis’s great grandson, John Graybill, and raise funds to support his foundation, the Curtis Legacy Foundation.

The Curtis Legacy Foundation
John Graybill is undertaking a similar journey as his ancestor, this time focusing his influential camera lens on the living descendants of those North American Indians that Curtis immortalized with his photogravures long ago. The northstar of the Curtis Legacy Foundation to honor the legacy of his great-grandfather with good works for the Native American population.
The foundation’s first major project is to locate, photograph, and interview living descendants of those Indians portrayed in The North American Indian. In 2018, John and his wife Coleen, who is also an accomplished photographer, began this work in Seattle when they photographed Mary Lou Slaughter, the 3x great-granddaughter of Princess Angeline, who was Curtis’ first Native American subject.

Highlights of the Descendants Project so far:
Nine descendants have been interviewed and photographed to date.
Seven tribal nations are currently represented.
One person, now 95 years old, from Curtis’ original photographs has been photographed, with two more located.
One current Chief has participated.
One is a survivor of Indian Residential School.
One, who once shunned her heritage, is now a master basket weaver.
Some actively practice their cultural ceremonies, some do not.
More information about the Descendants Project and the Curtis Legacy Foundation can be found at www.CurtisLegacyFoundation.org.

About the Reception
We are honored to host Edward S. Curtis’s great grandson, John Graybill, at our benefit reception on Friday and Saturday, February 14th and 15th from 5 to 9 pm. Drawing on our mutual admiration for Curtis’s works and desire to champion the descendants of his subjects, Valley Fine Art will donate proceeds to The Curtis Legacy Foundation. Guests at the reception will be able to view side-by-side examples of Curtis’s and Graybill’s photogravures featuring descendants born decades apart, with the story behind the pieces and Mr. Graybill on hand to share his personal account.
You will see:
“Red Cloud, Sioux, 1905” alongside Henry Red Cloud;
“Old Person, Piegan, 1911” alongside Reevis, “Mountain Chief;
and Piegan, 1911” alongside Peter Vandenberg.

About the Gallery
The incomparable collection of masterworks by Edward Curtis sets Valley Fine Art apart from all other galleries in the west. Mia Valley has earned recognition as one of the foremost experts in the ethnographic work by Edward Curtis, and she and her staff are frequently called upon to act as authorities on Edward Curtis’s work.