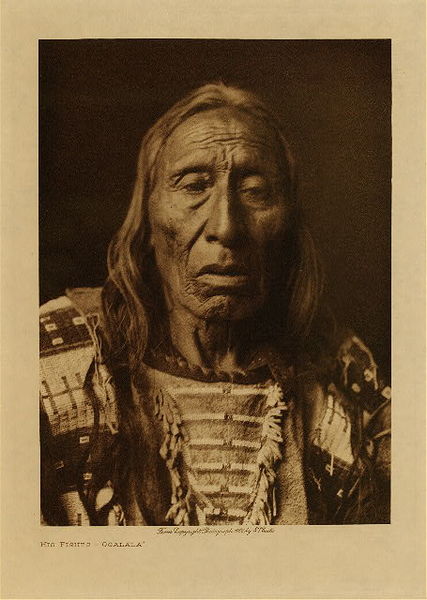 Vintage Photogravure
Born 1832. At fourteen he accompanied a war-party under Long Bear and Buffalo Head against the Apsaroke. The ground was muddy, and the horses of the chiefs becoming exhausted, the warriors went on without their leaders. Arriving in the Crow country, they charged upon some hunters who were engaged in cutting up meat, killed and scalped two, and escaped with about ten horses. His Fights and the other boys guarded the clothing and extra horses of the warriors during this fight. When a young man, he went again against the Apsaroke. When the enemy was sighted, White Man's Fire, the medicine-man, donned his headdress of buffalo-horns and eagle-feathers, and while the chief held forward the war pipe he prayed, each of the warriors extending his own pipe toward the enemy. Then the medicine-man rode toward the war-pipe, which now lay on the ground, dismounted, and sat in front of it, while His Fights raised it and gave it to White Man's Fire, saying "Brother-in-law, go and tell the warriors what you have seen." A bit of buffalo-chip was placed on the top of the tobacco in the pipe and fire applied, after which the medicine-man smoked. Then he pointed with his thumbs and thrust one hand after another in the direction of the enemy, exclaiming "She! She!"-indicating that his heart was hot against them. "I see a hundred horses coming toward us. We will kill the Raven Men and one of them will be dressed like a chief." Then they charged, and succeeded in running off about eight hundred horses. The Apsaroke rushed out, and two boys and three men, one of the latter wearing a shirt covered with weasel-skins were killed. It was afterward learned that he was Big Otter. In the retreat twenty Sioux were killed and about half of the horses lost. No scalp dance followed the return of the party. His Fights' medicine was given him by White Man's Fire, who, in the summer preceding this fight, got it in the Black Hills, from a geyser which the medicine-man entered and from which he emerged holding several long white roots, one of which he gave to each of the five warriors present, at the same time instructing them how to paint. His Fights took part in the battle of the Little Bighorn.