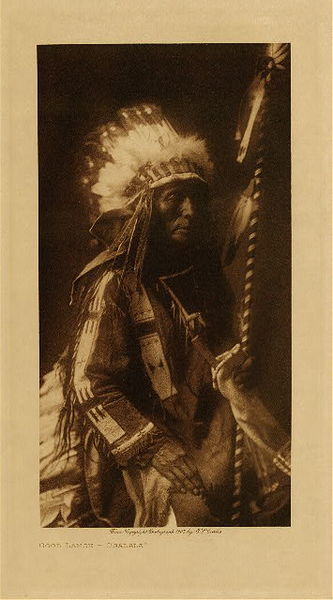 Vintage Photogravure
Born 1846. At thirteen he accompanied a party under his brother, then the possessor of the name Good Lance, against Pawnee, four woman and one man of whom they killed without loss to themselves. At twenty-five he led a party, and himself won first coup from the leader of the Pawnee, whom he struck with his lance and unhorsed, capturing the horse. On another occasion he struck with his coup stick a Pawnee boy left behind by his retreating companions; the father, armed with a Spencer rifle, turned to the rescue and fired at close range, but missed. Good Lance struck him with a sword, and others closing in killed father and son. He participated in ninety raids, mostly against the Pawnee. Fought against the troops in 1878, but was on the southern plains in 1876 and consequently took no part in the Custer fight. From a famous Cheyenne medicine-man south of the Platte he bought medicine of pulverized roots tied in deerskin, as a charm against bullets and arrows. The medicine-man clothed him in a buffalo-robe with horns and tail attached, and rubbed the charm all over his body. To prove that nothing could now harm him, the Cheyenne discharged a pistol at him, but the bullet only inflicted a skin wound in the arm; he then struck Good Lance in the back with a bayonet, but the resulting wound was slight. Good Lance paid the medicine-man a horse, and thereafter before entering a fight rubbed the medicine over his body. He fasted five times, the first time during two days and two nights. At dawn of the second day a white-breasted crow perched near him; at daylight the crow was transformed into a hawk. A thunder-storm approached and the hawk became a horse, which trotted toward the storm, while from beyond the ridge over which the animal passed was heard the sound of many horses whinnying. The storm broke, and holding his pipe close, he drew his robe over his crouching body and waited amid the rain and hail. After the storm abated he perceived that all the ground about him was perfectly dry, and that there were four men, each with a lance thrust into his body, who became mere ridges of hail. The faster concluded that the import of the vision was that he was destined to kill four men with a lance as he afterwards really did. His second fast was not rewarded, for he remained out only one day: the camp was being moved and he accompanied the others. On another occasion, he began to fast in the evening, standing upon a hilltop with his robe drawn about him. The following day as he slept under his robe he became aware of something creeping over his body toward his face. When he saw that it was a rattlesnake he was frightened; he dared not move. He set his teeth, and that thought came to him that this thing ought not to happen to one who had made offerings. The snake began to crawl away, and in his relief he moved; the reptile coiled at once and struck. Returning to the camp he went into a sweat-lodge, and though his body became stiff and swollen, he recovered.