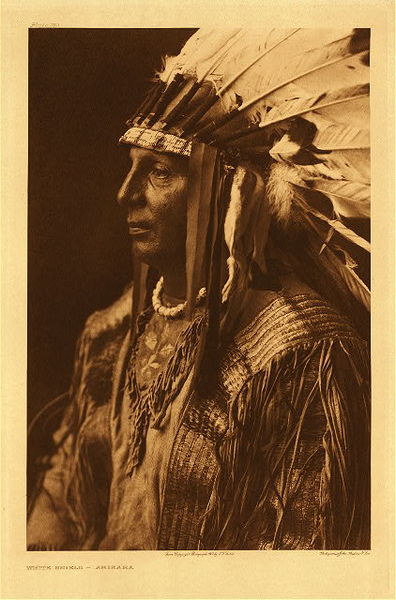 Vintage Photogravure
“A mixed-blood member of the medicine fraternity.”

Spend a moment to look at the details in this extraordinary tunic.

This Arikara wears an elaborate shirt, with meticulous details in this and the headdress. The details in the weaving are significantly different than designs in other Indian clothing.

What we find in Arikara clothing is most like what we remember in many pictorial descriptions of the North American Indian; breechcloths, fringed buckskin tunics shirts and leggings. For protection from rain and cold a warm, buffalo robe was worn. When dressed for ceremony they wore elaborately decorated shirts and war bonnets with eagle feathers and beadwork, which symbolize courage and accomplishment.

"The Arikara are a semi-agricultural people, and have apparently been such from an early period, many myths and ceremonies bearing relation to growing corn and other products of the soil. The variety of corn raised is characteristic of the agricultural tribes in the Southwest-dwarf-like but very leafy stalks with many small ears of varicolored grains growing near the ground."

"The basket common to these three tribes is claimed by the Arikara as originally a product of their own art, and writers acquainted with the basketry of southern Caddoan tribes assert this is a Caddoan pattern."

"The soul, called "Sishu," is responsible for all acts of man during life: it resides in the breast, and appears in the spoken word, in the look of the eye, in the movement of the muscles. It is the Sishu that rattles in the throat of the dying in an attempt to escape... All animals have Sishu, but not trees and inanimate objects."

"The Arikara developed the legerdemain of their all summer medicine ceremony to such an extent that other tribes, far and near, learned of their wonderful and potent magic. the superstition and credulity of the Indian are such that medicine-men living afar, as well as the tribesmen of the performers, believed these tricks to be the mysterious tricks of supernatural powers.
View Artist Biography
Back to Thumbnails