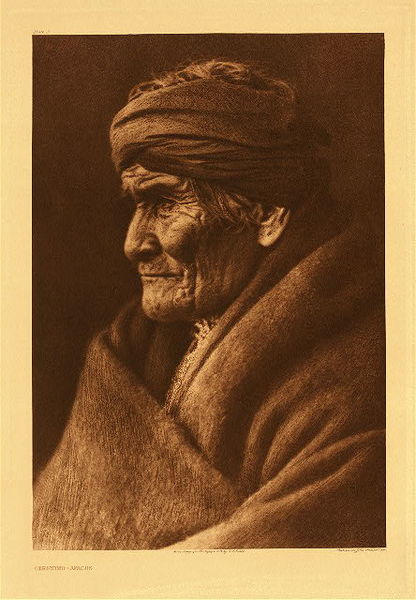 Vintage Photogravure
“This portrait of the historical old Apache was made in March, 1905. According to Geronimo's calculation he was at the time seventy-six years of age, thus making the year of his birth 1829. The picture was taken at Carlisle, Pennsylvania, the day before the inauguration of President Roosevelt, Geronimo being one of the warriors who took part in the inaugural parade at Washington. He appreciated the honor of being one of those chosen for this occasion, and the catching of his features while the old warrior was in a retrospective mood was most fortunate.” – Edward Curtis

Edward Curtis Apache images reveal the various elements of life in the warrior tribe. In the ethnographic study of the “The North American Indian” is rich in its depiction of the culture and lifestyle, with some emphasis on significant individuals.

In the late 19th century, Geronimo had one of the most well-known Indian names, and is memorable today. There are a number of stories about him, some violent and some peacemaker. In the end he realized the fate of his people was set and pursued the importance of learning new ways to make it work. However, his many attempts at this were thwarted by the inconsistency of the Federal government.

Toward the end, as a very independent persona, Geronimo became associated with resisting settling in the reservation, escaping three times with a band of renegades. As a result, he was captured and spent the rest of his life as a prisoner of war.

“General Crook said to me, ‘Why did you leave the reservation?’ I said: ‘You told me that I might live in the reservation the same as white people lived. One year I raised a crop of corn, and gathered and stored it, and the next year I put in a crop of oats, and when the crop was almost ready to harvest, you told your soldiers to put me in prison, and if I resisted, to kill me. If I had been let alone, I would now have been in good circumstances, but instead of that you and the Mexicans are hunting me with soldiers." - Geronimo

The following statement is telling regarding his spiritual perspective, which leaves room for both attempts at working toward a solution and defensive action.

"When a child my mother taught me the legends of our people; taught me of the sun and sky, the moon and stars, the clouds and storms. She also taught me to kneel and pray to Usen for strength, health, wisdom, and protection. We never prayed against any person, but if we had aught against any individual, we ourselves took vengeance. We were taught that Usen does not care for the petty quarrels of men." ~ Geronimo
View Artist Biography
Back to Thumbnails