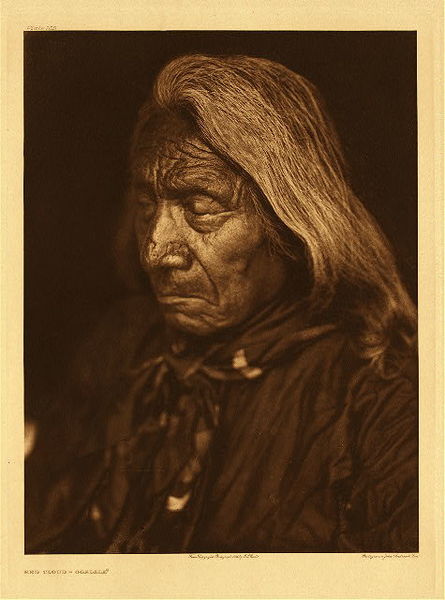 Vibtage Photogravure
Born 1822. At the age of fifteen he accompanied a war party which killed eighty Pawnee. He took two scalps and shot one man. At seventeen he led a party that killed eight of the same tribe. During his career he killed two Shoshoni and ten Apsaroke. Once going against the Apsaroke, he left the party and approached the camp on foot. About daylight a man came driving his herd to the range. Red Cloud charged him, killed him with arrows, stabbed him with the Apsaroke's own knife, and scalped him; he then took his clothes and started back, driving the horses. Men from the camp pursued, and a severe fight followed between the two parties. Once an Apsaroke captured his herd. He followed all night, and at daylight caught up with and killed the raider. Red Cloud received his name, in recognition of his bravery, from his father after the latter's death. Before that his name had been Two Arrows. His brother-in-law gave him medicine and tied up in a little deerskin bag. Always before going off to war Red Cloud rubbed this all over his body. All the tribes regarded his medicine as very potent. He first gained notice as a leader by his success at Fort Phil. Kearny in 1866 when he killed Captain Fetterman and eighty soldiers. In the following year he lead a large party, two or three thousand, it is said, on an attack on a wood-train at the same post, but was repulsed with great loss. Previously only chief of the Bad face band of Ogalala, he became the head-chief of the tribe after the abandonment of Fort Phil. Kearny. Red Cloud was prevented from joining in the Custer fight by the action of General Mackenzie in disarming him and his camp.
View Artist Biography
Back to Thumbnails