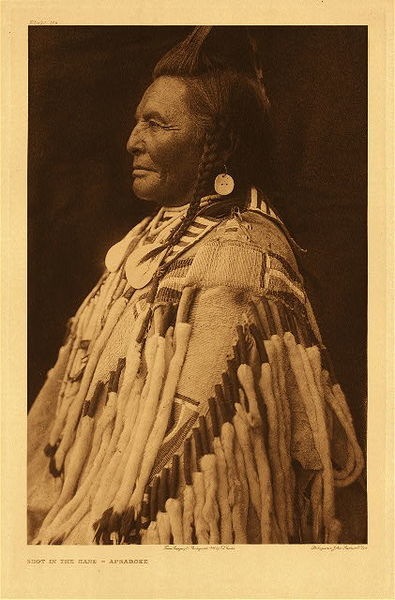 Plate 133 Shot in the Hand - Apsaroke

Vintage Photogravure
This portrait, taken in profile is clearly of a very important man. His hair is done up to be very large with two braids on the side, indicating that he has done well in battle. He is wearing earrings and adorned in a very elaborate costume with what appears to be animal tails as fringe. It almost appears as if he is smiling perhaps proud of his great life and many achievements.

Description by Edward Curtis: Born about 1841. Mountain Crow; Whistle Water clan; Fox organization. By fasting he obtained his hawk-medicine; it was his custom to make a powder of a hawk's heart, sweet-grass, and green paint, and to eat a portion of the mixture just before going into battle. Counted three "dakshe," captured three guns and one tethered horse, but lacked the medicine to become a war-leader. Once rushed up a height to strike the Piegan who were entrenched on the summit, when a shot brought him to the ground; he arose and charged again, and was again shot, this time rolling to the foot of the hill. Seven times he struck an enemy who was firing at him. After the suspension of intertribal hostilities the Ogalala chief Red Cloud, who boasted of having performed this feat four times, sent a challenge to the Apsaroke to produce a man who could equal the record, and Shot In The Hand was promptly named. Shot In The Hand played a spectacular part in the battle against the Sioux on Pryor creek. On another occasion he dismounted beside his father, who had been shot in the thigh, and though the latter was killed the son was rescued, wounded in the arm. Four times in as many different fights he seized an unharmed enemy by the hair and hurled him from his horse. He once accepted the staff of the Foxes, but there was no occasion to use it that summer. He "threw away" seven of his eight wives.
View Artist Biography
Back to Thumbnails