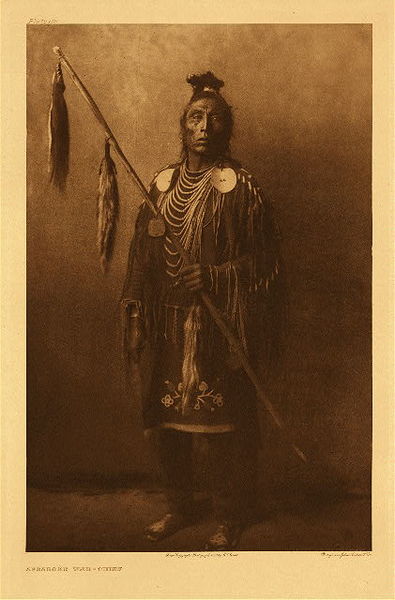 Vintage Photogravure
Caption by Edward Curtis: The three fox-tails hanging from the coup-stick show the subject - Medicine Crow to be possessor of three first coups, that is, in three encounters he was the first to strike one of the enemy's force. The necklace consists of beads, and the large ornaments at the shoulders are abalone shells.

This full figure image is an incredible example of an Apsaroke Costume. Holing a long Coup Stick with three fox tails hanging down the subject indicated that he is a great warrior or. His dress is very ornate, displaying beautiful patterns and fringe. His hair is work high on his head in a bun and he stares directly, almost fiercely, into the camera.

Born in 1848. Mountain Crow: member of the newly made Lodge clan and of the Lumpwood organization. At eighteen he fasted for four days and three nights, and on the morning of the fourth day a spirit resembling a white man appeared and foretold the passing away of the buffalo and the coming of many white men with cattle, horses, and steamboats. His medicine of hawk was purchased from another man. Counted three first coups, captured five guns and two tethered horses, and led ten successful war parties. In a fight with the Nez Perces he killed a warrior, counted first Coup upon him, and captured his gun - two regular honors at one time, besides the distinction of killing an enemy. This act he twice repeated in battles with the Arapaho and Sioux. Twice he fought on the side of the white men when “their flag was on the ground" : once against the Nez Perce’s in Chief Josephs retreat, and again under General Crook when the Sioux under Sitting Bull were fleeing across the Canadian border. Medicine Crow participated in ten severe fights, killed three men, had two horses shot under him, and had the distinction of having "thrown away" six wives.
View Artist Biography
Back to Thumbnails