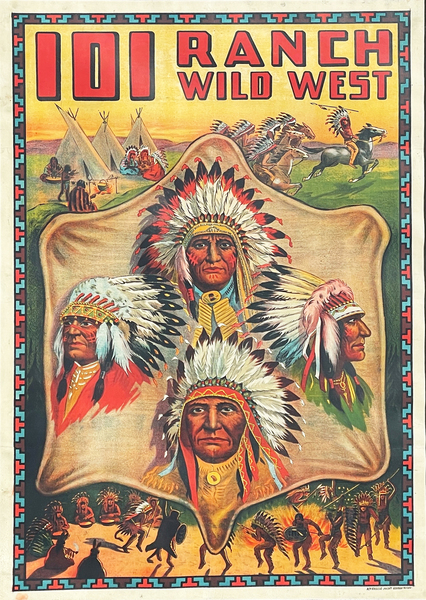 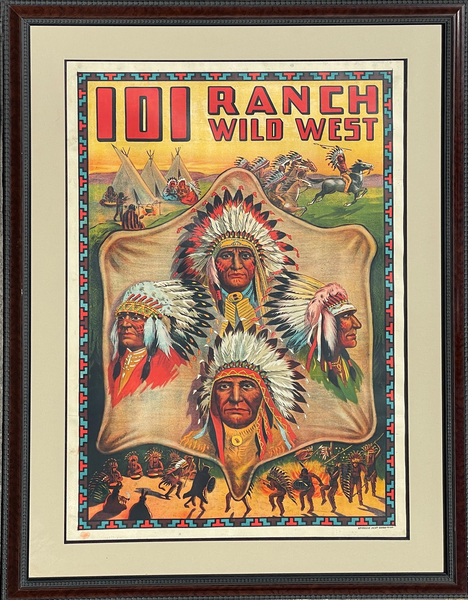 Vintage Stone Lithograph
The 101 Ranch, founded in 1892 by George W. Miller’s three sons, Joe C., Zack T., and George L., were well-known for the elaborate roundups they stages there. After sporadic shows at expositions, they finally made it a permanent organization and, with the help of Edward Arlington, The Miller Bros. 101 Ranch Wild West opened in 1908. They had a good deal of success and, as the posters here indicate, their show was quite lavish and borrowed heavily on the themes, and eventually on the personnel, of Buffalo Bill’s Wild West. They were one of the buyers in the auction of animals and materials of the Buffalo Bill-Pawnee Bill organization held in Denver in September 1913 to satisfy the claims of the U.S Printing and Lithographing Company. In 1914, the Miller Wild West went to England, only to have their horses and vehicles impressed by the government there as the war broke out. For the 1915 season, their big star was Jess Willard, Kansas cowboy who became world heavyweight champion by knocking out Jack Johnson. Enter Bill Cody: He struck a deal in which he received a daily retainer and part of the profits for his appearance that year with them. It was to be his last year as showman. After the season closed on November 4, 1916, he was exhausted and two months later, on January 10, 1917, he died in his sister’s house in Denver, at the age of 71.

This poster is composed of two vertical half-sheets – are in the Strobridge tradition of fine circus posters for which his firm was so well-known. There are hundreds of interesting details in such posters. If these emphasize one point it is the elaborate and expensive publicity practice of holding a parade of the entire cast of a circus or wild west show, with parade wagons, band, and all animals and personnel, down the main street of each city prior to show time. Both “101” and Buffalo Bill engaged in these lavish parades. In the poster to the left we see one of the many features of Buffalo Bill’s Wild West borrowed by the Miller 101 Ranch troupe: the “Equestrian Foot-Ball” scene which, we are told, “makes college foot-ball tame in comparison.” And at the bottom we see President Theodore Roosevelt waving from his stand, above the sign, “That’s Fine! That’s Bully!” and at right shaking hands with a cowgirl he calls “The Bravest Girl in All the West.” She is Lucille Mulhull, whom Will Rogers called “the first Cowgirl” and who was a champion at roping and tying wild steers. In 1900, when she was not yet 15, Roosevelt saw her perform at a Cowboy Tournament staged at the Rough Riders reunion in Oklahoma City and was in fact quite impressed by her daring feats. The poster to the right gives the full sweep of the Street Parade – so vast that it is split in two sections and its winding pattern as it comes from top to bottom adds to the enormity of it all. Note the parade wagon with the “Historic and Instructive” tableau of Pocahontas and Captain John Smith. This was a street parade not to be missed and having witnessed it, the public would be sure to follow this enormous pied-piper into the arena.
Back to Thumbnails