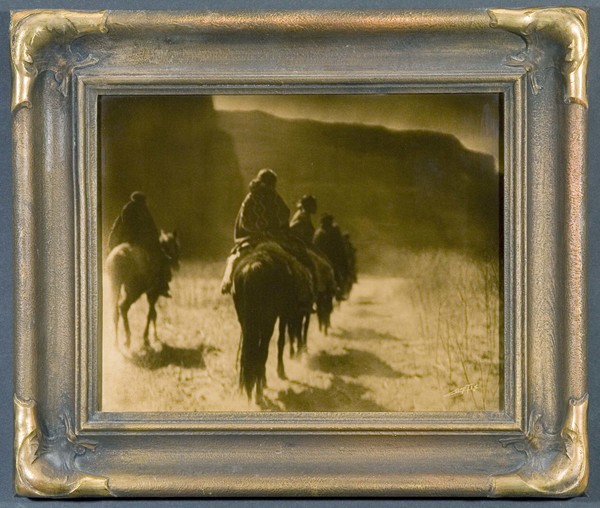 L/R
The thought which this picture is meant to convey is that the Indians as a race, already shorn in their tribal strength and stripped of their primitive dress, are passing into the darkness of an unknown future. Feeling that the picture expresses so much of the thought that inspired the entire work, the author has chosen it as the first of the series. - Description by Edward S. Curtis

Goldtone (Also known as Orotone or “Curt-tone”)
Edward S. Curtis perfected the medium regarded as Goldtone or Orotone to the extent he eventually named these images after himself calling them "Curt-Tones". Most photographic prints are a positive image on paper. The Curt-Tone process Curtis used was created by taking a clear plate of optical glass and spread a liquid emulsion onto the surface of the plate. Curtis then projected his negative onto the glass to create a positive image. The highlights and shadows could not be seen unless there was some type of backing on the image. He mixed a combination of banana oils and bronzing powers to create a sepia or a goldtone effect, and then spread this mixture onto the dried emulsion.
The final process involved backing the glass image to so that all the chemicals bonded together. The brilliance of the gold reflecting through the glass gave the Curt-Tone a truly three-dimensional quality with an aura unmatched by any other photographic process. When Edward S. Curtis was asked to describe the Curt-Tone process he said:
"The ordinary photographic print, however good, lacks depth and transparency, or more strictly speaking, translucency. We all know how beautiful are the stones and pebbles in the limpid brook of the forest where water absorbs the blue of the sky and the green of the foliage, yet when we take the same iridescent pebbles from the water and dry then they are dull and lifeless, so it is with orthodox photographic print, but in the Cur-tones all the translucency is retained and they are as full of life and sparkle as an opal."

The 1903 catalog was created by Curtis in an attempt to promote the Curt-Tones. The catalog illustrated 32 different images were sold with a beautiful frame specially designed for images which could be obtained in the following sizes and price: