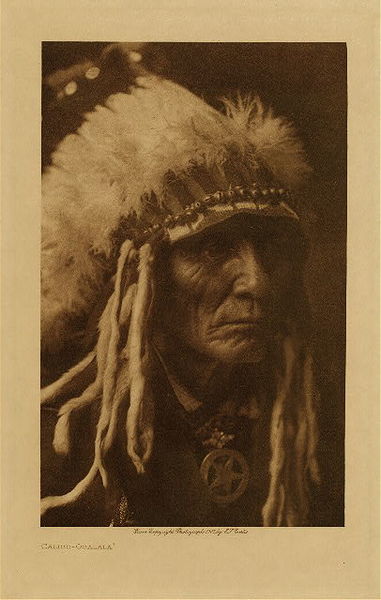 Vintage Photogravure
Born 1843. First war-party at fourteen against the Pawnee. At twenty-two he led eight men against the same tribe, and himself killed one and captured his gun. This party took twenty-nine horses. Later he led eight men and two women into the country of the Shoshoni. A man came out of the village, and Calico with five others charged him. Two had struck coop, when Calico raised his bow to win a third honor. Just then his horse shied and threw him, and an enemy grappled with him. The Shoshoni was the larger, and Calico's friends had ridden on. As the enemy reached for his knife, the Ogalala remembered his recently acquired revolver, which he drew and fired. The Shoshoni staggered back, but lunged again with his knife, when Calico shot him again in the breast. As he tore off the scalp, some one said, "Give me that scalp!" Looking up, he saw a friend who had brought back his horse, so he gave the scalp to him and took another piece for himself. The enemy was now swarming out of the camp, but the two Ogalala escaped on their horses. His name of Black Shield, Wohacha ka-sapa was changed to Minihuha after the agency traders came. In 1865 he was with his uncle Two Face, who, with another Sioux and a Cheyenne, was hanged at Fort Laramie for having mistreated a white woman he had ransomed from the Cheyenne and delivered up to the garrison. Though the woman said Calico was innocent, he was put in irons. Soon after that the Indians attacked a detachment and killed a sergeant and three privates. Calico was in eight great battles with Omaha, Pawnee, and Shoshoni, and in four battles with troops along Platte river. About 1874, at the suggestion of Red Cloud and others, he was made chief of the Tapislecha, Spleen, band of Ogalala, because of his good war record and his hospitality. He served several terms of enlistment as scout at Fort Robinson.