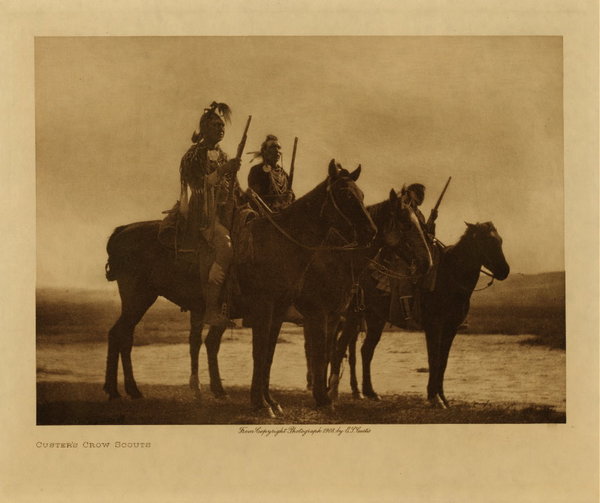 On June 25, 1876, George Armstrong Custer, Commander of the US Seventh Calvary led his troops to complete annihilation at the hands of Sioux and Cheyenne warriors. The site today, near Crow Agency, is marked as the Little Bighorn Battlefield National Monument. The Crow Nation was recruited to serve in the U.S. Army as Indian scouts. White Man Runs Him, Curley, Hairy Moccasin, and Goes Ahead were with Lieutenant Colonel George Armstrong Custer and the Seventh Cavalry in the Battle of the Little Big Horn, or Custer’s Last Stand. The Scout's only duties were to find the Indian encampments. Such was the case with Lt. Colonel Custer as he dismissed his Crow and Arikara Indian scouts.

White Man Runs Him (Image by Edward S. Curtis)
(Mahr-Itah-Thee-Dah-Ka-Roosh) – (born c. 1858 - died June 2, 1929) was a Crow scout serving with George Armstrong Custer’s 1876 expeditions against the Sioux and Northern Cheyenne that culminated in the Battle of the Little Big Horn. His accounts of the battle and the events leading up to the battle are invaluable to modern historians but were largely ignored for nearly a hundred years.


Also known as Crow Who Talks Gros Ventre and White Buffalo That Turns Around, he was born into the Bear Lodge Clan of the Crow nation, the son of Bull Chief and Offers Her Red Cloth. At the age of about 18, he volunteered to serve as a scout with the United States Army on April 10, 1876, in its campaign against the Sioux and Northern Cheyenne, traditional enemies of the Crow.

Originally assigned to the infantry, he was later transferred to Custer’s Seventh U.S. Cavalry. He scouted for Lieutenant Charles Varnum’s column in the days preceding the battle. On June 25, 1876, he accompanied Varnum and Custer to the Crow’s Nest, a natural rock formation overlooking the Little Big Horn valley, to assess the situation. The Crow scouts, including White Man Runs Him, Goes Ahead, Curley, Hairy Moccasin and others, advised Custer to wait for reinforcements. Custer refused their advice however and prepared to attack.

When Custer saw the scouts taking off their uniforms and putting on Crow war clothing, he demanded to know what they were doing. They responded that they wished to die as warriors rather than soldiers. Angered, Custer sent them away about an hour before engaging in the final battle. White Man Runs Him retired to a ridge along with Goes Ahead, Hairy Moccasin, and Strikes That Bear to join Major Marcus Reno. They were engaged briefly in battle but would survive the engagement. He then joined Colonel John Gibbon's column.

After the battle, he lived on the Crow reservation near Lodge Grass, Montana. He was the step grandfather of Joe Medicine Crow, a Crow tribal historian who used his grandfather’s stories as a basis for his later histories of the battle. His status as a Little Big Horn survivor made him a minor celebrity late in life and he even made a cameo appearance in the 1927 Hollywood movie, "Red Raiders".

Despite his fame, his accounts of the battle and Custer’s command were largely ignored for nearly a century. The United States Army and Custer’s widow Libby had begun a public relations campaign to portray Custer as a gallant fallen hero. The Crow scouts depiction of Custer as vainglorious, headstrong, and reckless did not fit with the accepted view of the time. White Man Runs Him, the other surviving scouts, as well as Sioux and Cheyenne warriors told their side of the story to photographer and writer Edward S. Curtis in the early 20th Century. His book told their story, but even he left out the more controversial parts of the account. It wasn't until the late 20th Century when Curtis's private notes became public that most historians began to take a second look at Native American accounts of the battle.

White Man Runs Him lived the remainder of his life on the Crow reservation in the Big Horn Valley region of Montana, just a few miles from the site of the famous battle. He died there in 1929 and was buried in the cemetery at the Little Big Horn Battlefield.


(Curley, by D.F. Barry, 1878)
Curley
(or Curly), is the English name for Ashishishe a Native American of the Crow tribe. Ashishishe was born in approximately 1856 in Montana, the son of Strong Bear (Inside the Mouth) and Strikes by the Side of the Water. Curley resided on the Crow Reservation in the vicinity of Pryor Creek, and married Bird Woman. He enlisted in the U.S. Army as an Indian scout on April 10, 1876 and was later chosen to scout for the Seventh Cavalry during the Little Bighorn expedition in 1876 along with fellow Crow warriors White Man Runs Him, Goes Ahead, Hairy Moccasin and others. He witnessed parts of the Battle of the Little Bighorn, and his translated account later appeared in several newspapers, as he was thought to be the only surviving witness from the U.S. side of Custer's Last Stand. Curley later gave several variations on his account, and the accuracy of his recollections has been questioned.

However, two of the most influential historians of the Battle of the Little Bighorn, Walter Mason Camp (who interviewed Curly on several occasions) and John S. Gray, accepted Curley's account. Curley later lived on the Crow Reservation on the bank of the Little Bighorn River, close to the site of the Battle. He served in the Crow Police. He divorced Bird Woman in 1886, and married Takes a Shield. Curley had one daughter Awakuk Korita ha Sakush ("Bird of Another Year") who took the English name Nora. Curley received a U.S. pension as of 1920. He died of pneumonia in 1923, and his remains were interred in the National Cemetery at the Little Bighorn Battlefield National Monument, only a mile from his home.


Hairy Moccasin (Image by Edward S. Curtis)
(also known as Esh-sup-pee-me-shish) was a Crow scout for George Armstrong Custer’s Seventh Cavalry during the 1876 campaign against the Sioux and Northern Cheyenne. He was an survivor of the Battle of the Little Big Horn. The Crow, also called the Absaroka or ApsÃ¡alooke, are a tribe of Native Americans who historically lived in the Yellowstone river valley and now live on a reservation south of Billings, Montana.

He volunteered to become an Army scout on April 10, 1876, and joined fellow Crow warriors White Man Runs Him, Curley, Goes Ahead and several others to assist the Army's fight against the Sioux and Northern Cheyenne. Both tribes were traditional enemies of the Crow.

After scouting the encampment on the banks of the Little Big Horn River, they reported to Custer. After Custer refused their advice to wait for reinforcements, Hairy Moccasin was dismissed by Custer about an hour before the last stand. He joined Strikes the Bear, White Man Runs Him, and Goes Ahead with Major Marcus Reno's column on the ridge overlooking the last stand. Attacked but not overrun, most of Reno's men survived the engagement.

After the Black Hills War ended, Hairy Moccasin settled onto the Crow Reservation in Montana. He died October 9, 1922 near Lodge Grass and was buried in Saint Ann's Cemetery.


Goes Ahead (Image by Edward S. Curtis)
(d. May 31, 1919) was a Crow scout for George Armstrong Custer’s Seventh Cavalry during the 1876 campaign against the Sioux and Northern Cheyenne. He was a survivor of the Battle of the Little Big Horn, and his accounts of the battle are valued by modern historians. The Crow, also called the Absaroka or Apsarooke, are a tribe of Native Americans who historically lived in the Yellowstone river valley and now live on a reservation south of Billings, Montana.

Born into the Crow tribe, he was also known as The First One, Goes First, The One Ahead, Comes Leading, Man with Fur Belt, and Child of the Stars. He volunteered to serve as a scout with the U.S. Army against the traditional enemies of the Crow, the Sioux and Northern Cheyenne along with fellow Crow warriors such as White Man Runs Him, Curley, White Swan, Half Yellow Face, and Hairy Moccasin.

The scouts sighted the encampment on the banks of the Little Big Horn River near the current site of Crow Agency, Montana. On June 25, 1876, Goes Ahead and the other scouts warned Custer not to attack but to wait for reinforcements. Custer refused their advice and prepared for an attack. Goes Ahead and the others took off their Army issued uniforms and put on traditional Crow clothing with eagle feathers to assist their flight to the spirit world should they be killed. When Custer saw this, he was enraged seeing the move as defeatism and he dismissed the scouts. Goes Ahead and the others joined Major Marcus Reno on the ridge overlooking the last stand. Attacked but not overrun, Marcus’s column survived the engagement.

After the battle, Goes Ahead settled on the Crow reservation, married and had a family. He was interviewed by historian and photographer Edward S. Curtis in the early 20th Century. His book was one of the first to present a balanced account of the battle to the general public but even then the more controversial parts of the story were not disclosed. The whole account of Curtis's interviews with Goes Ahead and the other Crow scouts would not become general knowledge until Curtis's notes became public in the 1990s more than 40 years after his death.

Goes Ahead died in 1919 and was buried in the military cemetery at the little Big Horn Battlefield. His widow, Pretty Shield, became a sought after source of information concerning the battle late in her life.
View Artist Biography
Back to Thumbnails