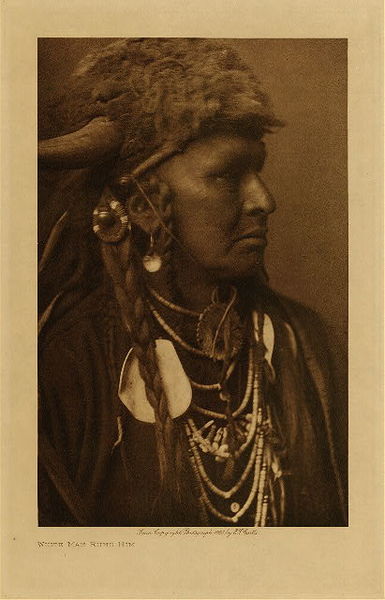 Vintage Photogravure
Born about 1854 or 1855. Mountain Crow; Big Lodge clan; Lumpwood organization. His only coup was counted by the capture of a tethered horse. Noted for his many successful horse-raiding expeditions against the Sioux.
Scouted with Custer in his last campaign, and was one of the party of three or four scouts who, at the dawn of the morning of the Custer fight, first sighted the Sioux camp. A small party of Crow and Arikara scouts under Lieutenant Varnum, having traveled nearly all night, arrived shortly before dawn almost a the summit of the highest peak in the Wolf mountains, where the party slept for a short time. At approaching light White Man Runs Him and a couple of companions went to the top of the high peak which gave them the first view of the Sioux encampment. Following Custer's coming up to view the valley and its camp of hostiles, he was with Custer until the Sioux made their attack on him. White Man Runs Him's recollections of that day are exceedingly clear. The author spent several days with him traveling carefully over the ground covered on the day of the disastrous fight on the Little Bighorn, part of this time being accompanied by general C.A. Woodruff.
White Man Runs Him possesses no medicine derived from his own vision, but once fasted four days and four nights in the Bighorn mountains on a peak known to the Apsaroke as "Where White Man Runs Him Fasted." Of his seven wives he gave up six "good ones," that is, those who had borne him children; to discard such was an indication of a strong heart.