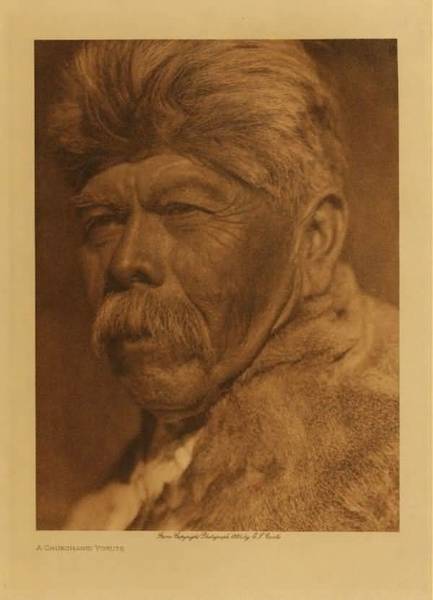 Vintage Photogravure
Dress: men, and a great many women, more only loin cloth; other women had double aprons of shredded willow-bark, tules, or sedge, more rarely of skin. IN cold weather both sexes used robes made of strips of the skins of rabbits, coyotes, or water foul. Moccsasins were rare. Men and women drew their hair together at the back of the head and tied it in a bunch or a sheaf with a cord, or passed a head-band from the base of the cranium up over the top. In the north women generally tattooed the chin, and some men the chest and forearms; and both sexes occasionally wore a bit of bird-bone, or, rarely, a cylinder of clamshell in an orifice in the lobe of each ear and the septum of the nose. In the south, however, they did not tattoo, and ornaments were long, slender pendants of clam-shell worn about the neck, in the lobes of the ears, and the septum. - Edward Curtis
View Artist Biography
Back to Thumbnails