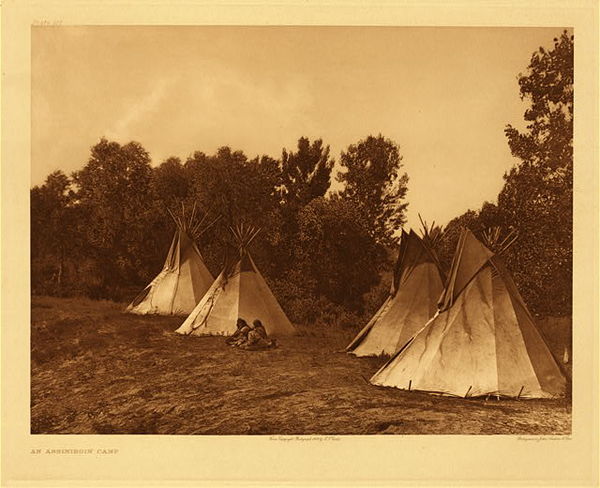 Vintage Photogravure
Three centuries ago the seven divisions of the Dakota were dwelling in the region between the headwaters of the Mississippi and the west end of Lake Superior. About the time of the landing of the Pilgrim Fathers, a band of the Yanktonai, deserting their tribesmen in anger, says tradition, over wrong done to the chief's wife, moved away to the north and east, until, after indefinite wandering, they established a temporary home on the shores of a wooded lake. Thus was born the Assiniboin tribe, first mentioned as distinct from the Dakota by the Jesuit Relation of 1640 on "Lake Alimibeg," later identified as either Rainy lake on the northern boundary of the present state of Minnesota, or else Lake Nipigon, north of Lake Superior in the direction of Hudson Bay.

In common with other tribes of the Missouri, the Assiniboin fell prey to the scourge of the smallpox, which in 1838 spread to their camp, at that time in the country to the east of Fort Buford, North Dakota. Fully one half of the occupants of their four hundred tipis succumbed.
View Artist Biography
Back to Thumbnails