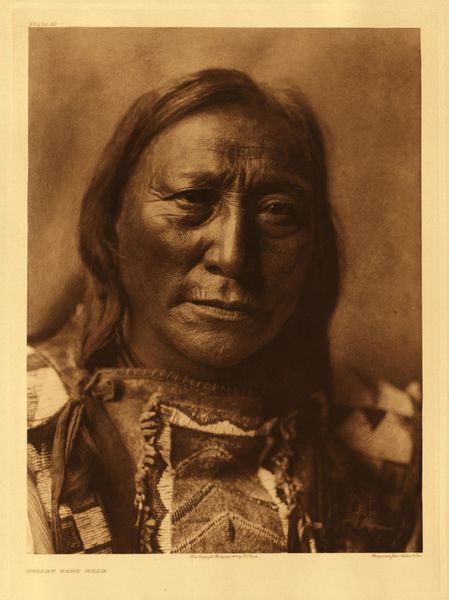 Vintage Photogravure
The life of this Brule Sioux is briefly treated in Volume III, page 186.

Born 1850. First war-party at twelve against Pawnee. At nineteen he took the pipe and led a party, which killed a number of Pawnee wood-haulers. Struck a first coup-"kill right"-in that battle. After that his father, Iron Shell, desired him to take that name, but he said that he would take his grandfather's name instead, and make the name Hollow Horn Bear good. During his career as a warrior, he counted coup many times and participated in twenty-three fights with Pawnee, Omaha, Ponca, Ute, Arikara, and United States troops. He was present at the Custer fight.

*Additional biographical notes (not written by Curtis):
*A son of the famous, mid-19th century Brule chief Iron Shell, he nearly died as an infant during the first U.S. Army attack on a Lakota village, at the Blue Water battle near Fort Laramie in 1855. After the attack, his mother recovered the infant from the wreckage of the village. Hollow Horn Bear became a distinguished leader of the Brule. His portrait graced the old, U.S. 14-cent stamp.

Hollow Horn Bear traveled often to Washington, D.C., rode in the inaugural parade of Theodore Roosevelt, and died in the Capitol in March, 1913, of pneumonia contracted while riding in the rain during the inaugural parade for Woodrow Wilson.
View Artist Biography
Back to Thumbnails