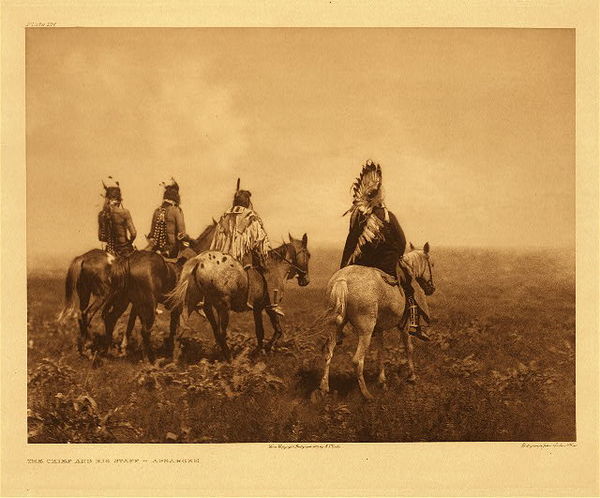 Plate 137 The Chief and His Staff

Vintage Photogravure
In stature and in vigor the Apsaroke, or Crows, excelled all other
tribes of the Rocky Mountain region, and were surpassed by none
in bravery and in devotion to the supernatural forces that gave
them strength against their enemies. Social laws, rigidly adhered to,
prevented marriage of those even distantly related, and the hardships
of their life as hunters eliminated infant weaklings. The rigors of this
life made the women as strong as the men; and women who could
carry a quarter of a buffalo apparently without great exertion, ride all
day and all night with a raiding war-party, or travel afoot two hundred
and fifty miles across an unmarked wilderness of mountains, plains,
and swollen streams in four days and nights, were not the women to
bring forth puny offspring.

The Apsaroke were and are the proudest of Indians, and although
comparatively few (they now number only one thousand seven
hundred and eighty-seven, and are constantly decreasing), they rarely
allied themselves with other tribes for purposes of defence. For
probably two and a half centuries they were the enemy of every tribe
that came within striking distance, and for a goodly part of this time
they were virtually surrounded by hostile bands with a common hatred
against this mountain tribe that likened itself to a pack of wolves. The
swarming thousands of the western Sioux, aided by the Cheyenne
and Arapaho, tried to force them westward. The powerful Blackfeet
invaded their territory from the north and northwest, Flatheads and
Nez Percés were worthy foes from the west, and the wily Shoshoni
pressed in from the south; yet the Apsaroke were ever ready to repel
invasion from whatever direction it might come.
While the general status was one of hostility, there were brief
intervals of peace with the different tribes, even with the Sioux, their
bitterest foe, with whom at times they smoked the pipe and negotiated
peace for a year. Such truces so seriously made in many smokes,
were often quickly broken by some impetuous or irresponsible young
man stealing a horse or a woman; then in a moment peace was at
an end and conflict raged again. As a rule, however, these periods of
1

Tranquillity lasted long enough to permit discussion of previous fights
and a general comparison of the honors therein won.
The country which the Apsaroke ranged and claimed as their own
was an extensive one for so small a tribe. In area it may be compared,
east and west, to the distance from Boston to Buffalo, and north to
south, from Montreal to Washington — certainly a vast region to
be dominated by a tribe never numbering more than fi fteen hundred
warriors. The borders of their range were, roughly, a line extending
from the mouth of the Yellowstone southward through the Black
Hills, thence westward to the crest of the Wind River mountains,
northwestward through the Yellowstone Park to the site of Helena,
thence to the junction of the Musselshell and the Missouri, and down
the latter stream to the mouth of the Yellowstone. This region is the
veritable Eden of the Northwest. With beautiful broad valleys and
abundant wooded streams, no part of the country was more favorable
for buffalo, while its wild forested mountains made it almost unequalled
for elk and other highland game.
View Artist Biography
Back to Thumbnails