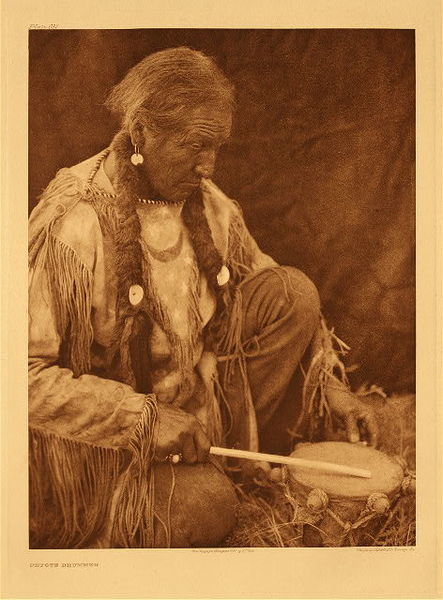 Vintage Photogravure
Regarding the Peyote Ceremony the leader, in prayerlike recital tells the story of peyote. “We are assembled in a sacred lodge for the worship of the Divine Ones; we know the Wakoda created all things, animal and plant. We know that He Himself created Peyote. Believing this, we know that He created it for our use, for our good. We know that we should not look upon Peyote as medicine, nor worship it as an idol, but rather regard it as a symbol of Wakoda, our Creator. We know that our minds, our thoughts, should be upon spiritual things while worshipping in this lodge.”

After the peyote is ingested, the Leader addresses the member in words of admonition: “Remember the sacred nature of the meeting. Remember that we are worshipping Wakoda as instructed by him.”

The leader, accompanied by the drummer, next chants the four sacred songs, meanwhile holding a staff and a wisp of sage in his left hand, and, in his right hand, a rattle with which he accompanies the chant.

This worshipful time is followed by the Water Ceremony, which celebrates the earth, “Our Mother.” The song ends, the leader speaks, telling his followers of Wakoda’s creation of day, the coming of the sun; that through the spirit of water they have life. With the closing words he places the staff and rattle on the alter.
View Artist Biography
Back to Thumbnails