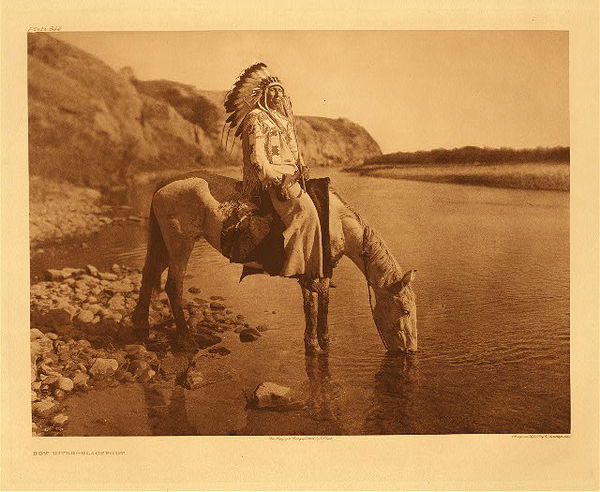 Vintage Photogravure
The Blackfoot, Bloods, and Piegans may be considered under one over-arching group as their tribes, though distinct, are culturally and territorially intertwined. These people in general are remarkably stout, tall and well-proportioned men. Their complexion is rather swarthy, although they frequently have fair skin and gray eyes, with light hair.

Edward Curtis continues his historical narrative: They daub their bodies, robes and garments profusely with red earth, which appears to be the principal article of their toilet. They have another favorite pigment, which they procure on their excursions beyond the Rocky Mountains, of a glossy lead color, which is used to daub their faces after red earth has been applied. This gives them a ghastly and savage appearance.

Their dress consists of a leather shirt, trimmed with human hair and quill work, and leggings of the same; shoes are leather of buffalo skin dressed in the hair; and caps, a strip of buffalo or wolf skin about nine inches broad, tied around the head. Their necklace is a string of grizzly bear claws. A buffalo robe is thrown over all occasionally.

Their ornaments are few – feathers, quill-work, and human hair, with red, white and blue earth.
View Artist Biography
Back to Thumbnails