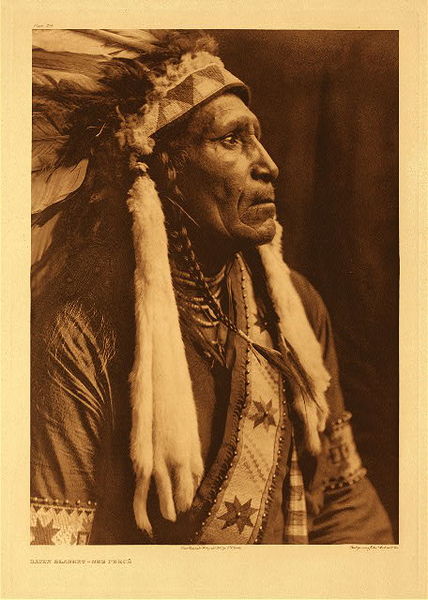 Vintage Photogravure
This profile reveals the details of the Nez Perce headdress and clothing.
“The war-bonnet of eagle-feathers, with pendant weasel-skins, as well as the otter-fur wrappings of his hair braids, indicates the extent to which the Nez Perce were influenced by the Indians of the prairies, whom they met in their annual pilgrimage to the buffalo country.” – Edward Curtis

The North American Indian lifestyle included shared hunting and summering grounds. As a result, many clothing, customs and mythologies were adopted for their practicality and, in the case of this headdress, grandeur.

Outside of the ceremonial, the clothing of both sexes was plains style, with the single exception of the fez shaped basket hats of the women. The usual material for clothing was deerskin, but the dresses of women were frequently of mountain-sheep skin.

Raven Blanket is dressed in a full headdress here and is staring off into the distance. His sad eyes are representative of the treatment that his people endured since the White Man come to his land.

"The history of the Nez Perces, when studied as a part of the North American Indian's conflict with civilization, is convincing that there was absolutely no course, policy, or conduct open to him which insured fair treatment, nor was there any road open to him which seemed materially to alleviate the situation or to stay the grasping encroachment. The inert, unorganized Indians of southern California were literally crowded from the earth. The fact that they, with their pacific disposition, made no resistance has no effect on the covetous settler, nor did it cause the Government to reach to them a helping hand in appreciation of their good behavior. They suffered through good conduct. The warlike, haughty tribes of the plains stood the imposition as long as they could, and then their long-smoldering resentment broke into flame and they struck back as only Indians can, and they suffered through their hostility. The Nez Perces, a mentally superior people were friendly from their first contact with white men, and as a tribe they always desired to be so. Their history since 1855, and particularly the war of 1877, tells how they were repaid for their loyalty to the white brother."