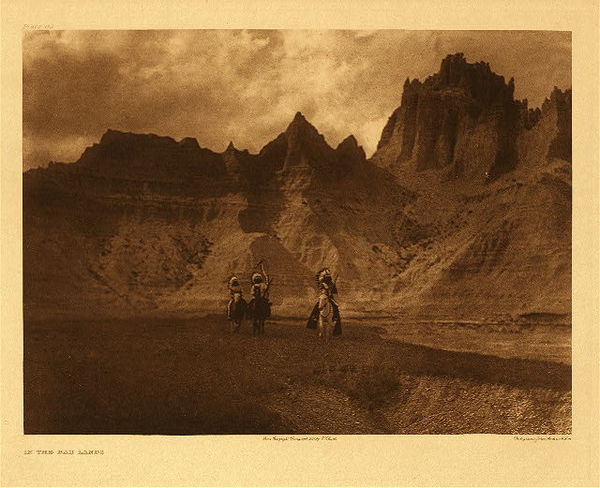 Plate 119 In the Badlands

Vintage Photogravure
This striking picture was made at Sheep Mountain in the Bad Lands of Pine Ridge reservation, South Dakota. – Edward Curtis

As with the Canon de Chelly, Curtis artistically captured a stark landscape made beautiful by the highlights and shadows of the craggy mountains. This dramatic backdrop not only exemplifies the difficult existence in the Badlands, but is also an artistic statement that brings focus to the three figures riding with full headdress.

Not only the main chief of the Sioux wore a grand headdress, but there were many Soldier Chiefs among the tribe. These men appointed the individual soldiers within their patriarchal camps by donning “their war-bonnets and going tipi to tipi, shaking the hand of each man chosen. To be selected a Soldier was a distinct honor, to which only men of tried courage and strength, who had counted at least one undisputed coup (requires an actual contact with the enemy), could aspire. Red Cloud, before he became a chief, was always chosen Soldier Chief, for, being a man of indomitable courage, he carried out the chief’s orders with reckless disregard of consequences.” From The North American Indian, volume 3.
View Artist Biography
Back to Thumbnails