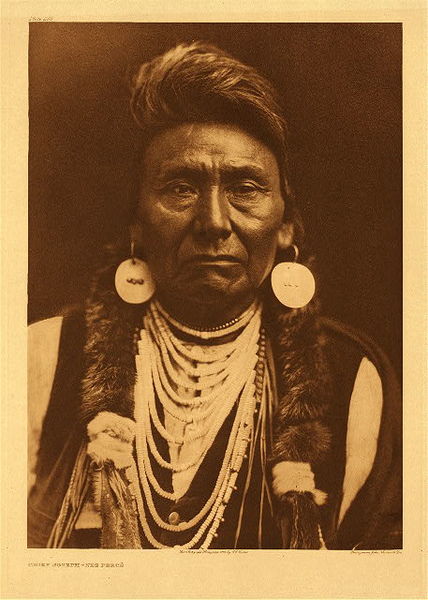 Vintage Photogravure
A “peace chief “not a “war leader.” This photogravure is of the most well-remembered chief of his time.

The name of Chief Joseph is better known than that of any other Northwestern Indian. To him popular opinion has given the credit of conducting a remarkable strategic movement from Idaho to northern Montana in the flight of the Nez Perces in 1877. To what extent this is a misconception has been demonstrated in the historical effort to retain what was rightly their own makes an unparalleled story in the annals of the Indian's resistance to the greed of the whites. That they made this final effort is not surprising. Indeed, it is remarkable that so few tribes rose in a last struggle against such dishonored and relentless objection. – Edward Curtis

Edward Sheriff Curtis wrote extensively about the Nez Perce tribe, with Chief Joseph as the main character in much of the narrative. Much written about at the time, he would also be familiar to the subscribers to his work.

Chief Joseph was the name given to two generations, with the elder being the third signor, out of fifty-five, of the first Nez Perce treaty. Chief Joseph, the younger, had the foresight to recognized that the White Man’s influx into their territory was imminent. He pursued good relationships with the Government, and worked to achieve healthy agreements to reside upon their familiar land, though smaller and within boundaries.

Mountainous, plentiful water and game provided a broad area for the smaller bands to thrive. As such, the situation lent itself to discontinuity when working toward a reservation solution, which required that all bands of the loosely organized tribe move to the bounded area within a deadline. Naturally, the autonomous, outlier chieftains refused and the result was the never-ending retraction of proposals and agreements that Chief Joseph worked to accomplish.

Joseph was not the only leader and the tribe itself saw him as a “peace chief,” not a “war leader.” Chief Joseph is best known, in part, because of his Anglican name. As writers picked up the stories, he became the hero of the quest as “General Joseph”. He was not the only tribal leader working for a realistic outcome, and he worked toward peaceable and fair solutions.

He is the “face” of the Nez Perce history and this portrait reveals the strength of his resolve, but not the fierceness of a warrior. At 63 years, the light from above reflects off the grey in his hair, exposing his age.
View Artist Biography
Back to Thumbnails