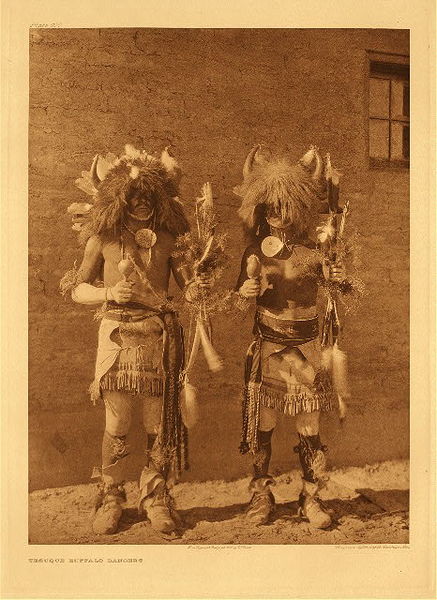 Vintage Photogravure
The Buffalo dance is performed, though the original object of exerting prenatural influence on the abundance and accessibility of the buffalo no longer prevails. The two male dancers are accompanied by the Buffalo Girl, who is fully clothed in native costume and has a pair of small horns on the head. These three give a very striking and dramatic performance under the watchful eye of the head of the hunters' society. – Edward Curtis

There are many secretive ceremonies that were not revealed to white men, but the public dances had not esoteric rites of a secret society nor vulgarities objectionable to American spectators.
In some of these dances game animals are personated, and on such occasions, which fall only in winter, the head of the hunters’ society, is the master of ceremonies. The underlying thought of the animal dances is to increase the supply of game.

The buffalo dance (Koo-hyare) is celebrated early in January. The performers are two men, a girl, and the head of the hunters’ society. The men are painted black above the waist, white from waist to knees, yellow below the knees. Small bells and eagle-feathers dangle from yarn leg-bands. On the head, but not concealing the face, is a striking mask of buffalo-hair and horns. The girl is fully clothed in native costume, including white leggings and moccasins with skunk-fur anklets, and a black manta. On her head is a pair of small horns, and down the back hangs a band of turkey-feathers terminating with an eagle-tail. This is a very strenuous dance, and the performers, of whom there are two sets which appear alternately, are under training with the singers and the war-chiefs for five nights in the kiva. The dance is a striking one. Scarcely moving from their places, the performers portray the actions of the buffalo, hunted, stampeding, charging, drooping with exhaustions, reviving for another effort to escape, all this in faultless accord with the sudden changes of tempo in the songs. Before they finish they are dripping perspiration, and the seasoned observer of native dancing, astonished that an Indian girl, usually the personification of deliberation in movement, can use her feet with such incredible rapidity and vigor; wonders even more at the source of their stamina in keeping the rhythm during the four repetitions of a rather extended song. Watchfully guarding the Buffalo is Pika, with his deerskin suit, his cougar-skin quiver and cougar-claw necklace, and his baldric of deerskin.
View Artist Biography
Back to Thumbnails