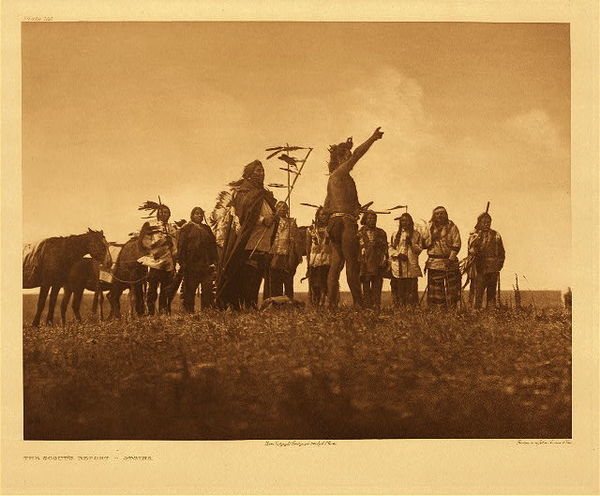 Vintage Photogravure
The Chief of the scouts, returning to the main party, tells in the vigorous and picturesque language so natural to the Indians what he has seen and experienced. While he speaks, the war-leader stands slightly in advance of his men, and carefully listening to the words of the scout, quickly forms his plan of action. – Edward Curtis

The Atsina tribe is interesting to follow, but not easy. "The Atsina, commonly designated Gros Ventres (Big Belly) of the Prairie, are of the Algonquian stock and a branch of the Arapaho. Their name for themselves is "Aaninen," Atsina being their Blackfoot name. Judging by their vague tradition, their original separation from the Arapaho must have occurred in early times; but care should be taken not to confuse this primal separation with their return to the north from an extended visit to the Arapaho during the last century."

Edward Curtis, in Volume V, describes the territories where they resided as difficult to pin down, and chose to spend the first four pages creating a picture of the Atsina through the stories of their battles. This photogravure is then a snapshot of what must have occurred over and over in the history of this tribe.

In the first recited battle - Close to defeat, a single gunshot from the first and only gun possessed by the Atsina. The earliest intertribal battle known in their traditions occurred when the tribe moved back to the north and into Shoshone territory. They were greatly outnumbered and were on the verge of being defeated when the lone gun in both tribes was used to shoot one of the Shoshone. Not being familiar with a firearm they “looked upon the mysterious killing as due to some spiritual power, and fled in terror.”

The stories found in Volume V of The North American Indian go on to describe the superiority they gained by acquiring horses, the losses they suffered when over-powered in winter and the decimation as they retreated in starvation.
View Artist Biography
Back to Thumbnails