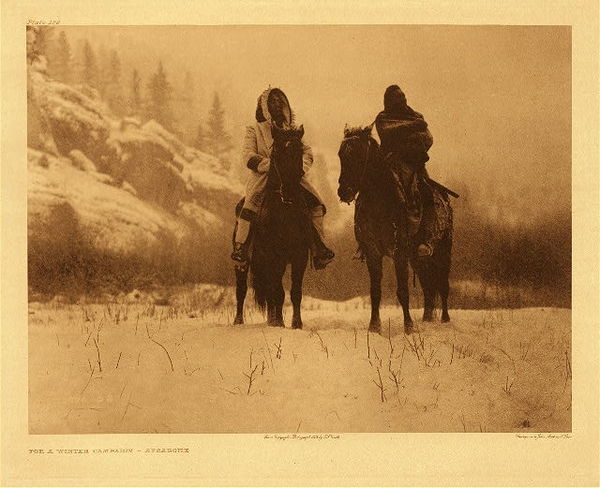 Plate 129 For A Winter Campaign

Vintage Photogravure
It was not uncommon for Apsaroke war-parties, mounted or afoot, to move against the enemy in the depth of winter. See Volume IV, page 105, for the narrative of such an expedition. The warrior at the left wears the hooded overcoat of heavy blanket material that was generally adopted by the Apsaroke after the arrival of traders among them. The picture was made in a narrow valley among the Pryor mountains, Montana. - Edward Curtis

In a short distance offensive, they would have traveled by horseback, but a long distance trek changed to travel on foot. A tale of a campaign against the Lakota and Cheyenne in winter gives us further idea as to how they travelled eleven days toward that confrontation.

“A crier was sent to alert warriors to prepare for the winter expedition. With only one horse per warrior, and many days of travel, each brought only the clothes on their backs, extra moccasins, firearms and food. Most horses were not ridden, but herded, so as to keep them fresh for the battle. This left them to walk through midwinter snow in Montana.”
View Artist Biography
Back to Thumbnails