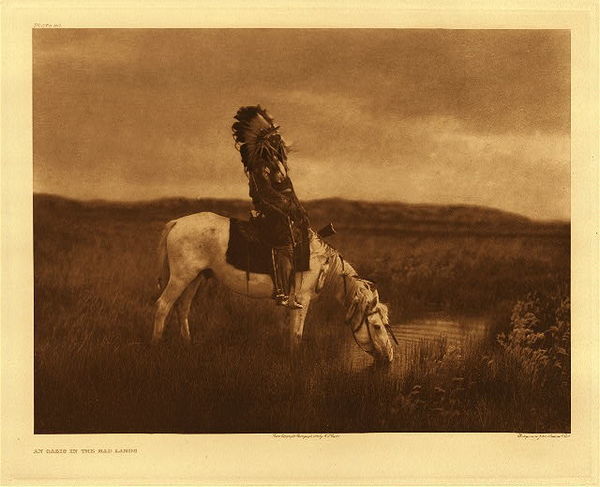 Plate 080 An Oasis in the Badlands

Vintage Photogravure
Born 1854. First war-party in 1865 under Crazy Horse, against troops. Led an unsuccessful war-party at twenty-two against Shoshoni. First coup when twelve horse-raiding Blackfeet were discovered in a creek bottom and annihilated. Led another party against Shoshoni, but failed to find them; encountered and surrounded a white-horse troop. From a hill overlooking the fight Red Hawk saw soldiers dismount and charge. The Lakota fled, leaving him alone. A soldier came close and fired, but missed. Red Hawk did likewise, but while the soldier was reloading his carbine he fired again with his Winchester and heard a thump and "O-h-h-h!" A Cheyenne boy on horseback rushed in and struck the soldier, counting coup. Engaged in twenty battles, many with troops, among them the Custer fight of 1876; others with Pawnee, Apsaroke, Shoshoni, Cheyenne, and even with Sioux scouts.
Red Hawk fasted twice. The second time, after two days and a night, he saw a vision. As he slept, something from the west came galloping and panting. It circled about him, then went away. A voice said, "Look! I told you there would be many horses!" He looked, and saw a man holding green grass in his hand. Again the voice said, "There will be many horses about this season;" then he saw the speaker was a rose-hip, half red, half green. Then the creature went away and became a yellow-headed blackbird. It alighted on one of the offering poles, which bent as if under great weight. The bird became a man again, and said, "Look at this!" Red Hawk saw a village, into which the man threw two long-haired human heads. Said the voice,"I came to tell you something, and I have now told you. You have done right." Then the creature, becoming a bird, rose and disappeared in the south. Red Hawk slept, and heard a voice saying, "look at your village!" He saw four woman going around the village with their hair on the top of their heads, and their legs aflame. Following them was a naked man, mourning and singing the death-song. Again he slept, and felt a hand on his head, shaking him, and as he awoke a voice said, "Arise, behold the face of your grandfather!" He looked to the eastward and saw the sun peeping above a ridge. The voice continued, "Listen! He is coming, anxious to eat." So he took his pipe and held the stem toward the rising sun. This time he knew he was not asleep, or dreaming: He knew he was on a hill three miles from the village. A few days later came news that of five who had gone against the enemy, four had been killed; one returned alive, and followed the four mourning wives around the camp singing the death-song. Still later they killed a Cheyenne and an Apsaroke scout, and the two heads were brought into camp.
View Artist Biography
Back to Thumbnails