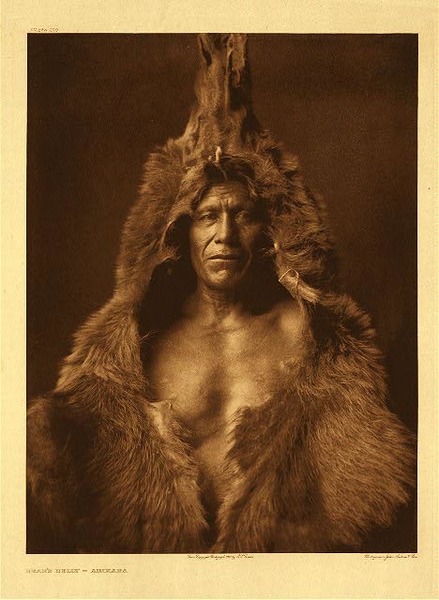 Vintage Photogravure
Born in 1847 in present-day North Dakota, Bear's Belly was a highly respected and honored warrior of the Arikara tribe.

He acquired his bearskin in a dramatic battle in which he single-handedly killed three bears, thus gaining his sacred medicine to remain part of him always.

"Needing a bear-skin in my medicine-making, I went into the White Clay hills. Coming suddenly to the brink of a cliff I saw below me three bears.

I wanted a bear, but to fight three was hard. I decided to try it, and, descending, crept up to within forty yards of them. I waited until the second one was close to the first, and pulled the trigger.

The farther one fell; the bullet had passed through the body of one and into the brain of the other. The wounded one charged, and I ran, loading my rifle, then turned and shot again, breaking his backbone. He lay there on the ground only ten paces from me.

A noise caused me to remember the third bear, which I saw rushing upon me only six or seven paces away. I was yelling to keep up my courage, and the bear was growling in his anger. He rose on his hindlegs, and I shot, with my gun nearly touching his chest.

The bear with the broken back was dragging himself about with his forelegs, and I went to him and said:

'I came looking for you to be my friend, to be with me always.' Then I reloaded my gun and shot him through the head. His skin I kept, but the other two I sold."

Courtesy of www.CurtisLegacyFoundation.com
View Artist Biography
Back to Thumbnails