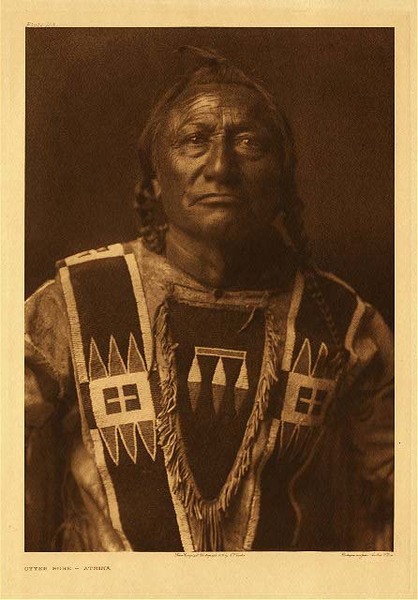 Vintage Photogravure
This subject got his name when instructed during a vision to wear a strip of otter fur around his head. Otter Robe is pictured here with typical Atsina hairstyle and dress.

Description by Edward Curtis: Born in 1851 near Fort Benton. When sixteen years of age he joined a war-party against the Piegan, but on this fist expedition gained no honors. On another raid against the same people he counted a first coup. A party of Atsina, of which he was a member, camped one night near a war-party of Sioux, not knowing of their presence. At dawn the enemy charged, but were driven back, and during the skirmish he counted another first coup. A party of Piegan stole some horses; the Atsina followed, overtaking the enemy and forcing them to abandon their booty; during the fight he killed one Piegan. On another expedition against the same people, Otter Robe killed one with the stock of his gun and counted first coup. In another battle with the Piegan, he rushed in, pulled an enemy from his horse, and killed him with his knife. When a young man he fasted two days and two nights by the river, and had a vision in which a tree became transformed to a warrior who told him he was to obtain many honors. The faster was instructed to paint as was the spirit-yellow on the temples, with a streak of red across the forehead-and to wear a strip of otter-fur around his scalp-lock. Otter Robe married at the age of thirty.
.
View Artist Biography
Back to Thumbnails