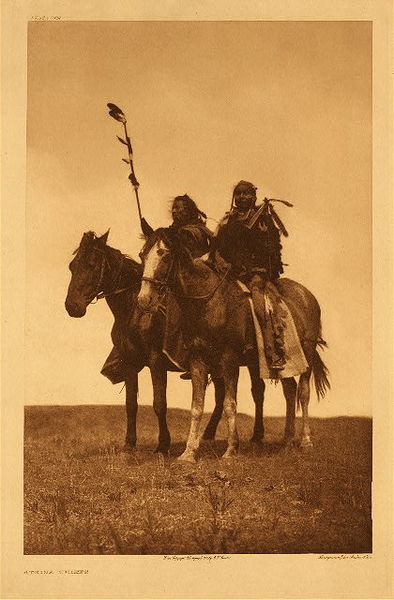 Vintage Photogravure
In this image two Atsina Chiefs are riding strong horses. One carries a long stick adorned with feathers which is perhaps a Coup stick. The picture was taken from below so that the chiefs looks extremely large and important. We also get a full view of the entire horse and rider.

Edward S. Curtis' description from, "The North American Indian”: "The Atsina, commonly designated Gros Ventres of the Prairie, are of the Algonquian stock and a branch of the Arapaho. Their name for themselves is "Aaninen," Atsina being their Blackfoot name. Judging by their vague tradition, their original separation from the Arapaho must have occurred in early times; but care should be taken not to confuse with this primal separation their return to the north from an extended visit to the Arapaho during the last century."

"The tribe was composed of ten bands, all under one head, who with the chiefs of the bands, formed the council. The head-chief conducted treaties on the part of the tribe, selected camp sites, and directed tribal affairs generally. When he and the council disagreed, two young men, each representing a faction, were sent out with a bundle of sticks. passing around in the camp in opposite directions they stopped at each sub-chiefs lodge and asked what side of the question he favored....having completed the circuit of the camp, the two young men returned to the head-chief's lodge, the decision of those represented by the messenger with the fewest sticks....."
View Artist Biography
Back to Thumbnails