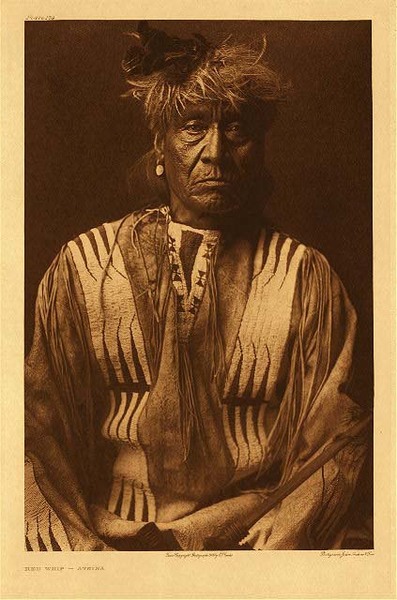 Vintage Photogravure
A tough looking elderly man of the Atsina tribe, Red Whip is picture head on in this photogravure by Edward Curtis. His nest of hair looks almost as if something is living in it. His expression is fierce and the lines in his face are deep. His animal hide dress is interestingly patterned. The dark background makes the entire figure stand out.

Description by Edward S. Curtis: Born in 1858 near Fort McGinnis, Montana. At the age of seventeen he went out on his first war expedition, going against the Sioux. The enemy was camped at Lodgepole Creek, and the Atsina attacked them at dawn, capturing several horses. Red Whip was in the lead of the charge and took a few of the animals single-handed. During a battle with the Piegan, he rushed into the enemy’s line and captured a gun, counting first coup on the owner. On another expedition the Atsina met a Sioux scout whom Red Whip charged and killed, then counted first coup and took his scalp. Later, the main body of the Sioux charged the Atsina; one singled out Red Whip and fired at him, but missed, and the young warrior shot him down. Red Whip was scouting on Tongue River with General Miles, when the Sioux charged a small body of soldiers, routing them. Red Whip says he stood firm and stopped the onrushing enemy until the troops escaped. His medicine, given to him by his uncle, is a strip of otter fur.
View Artist Biography
Back to Thumbnails