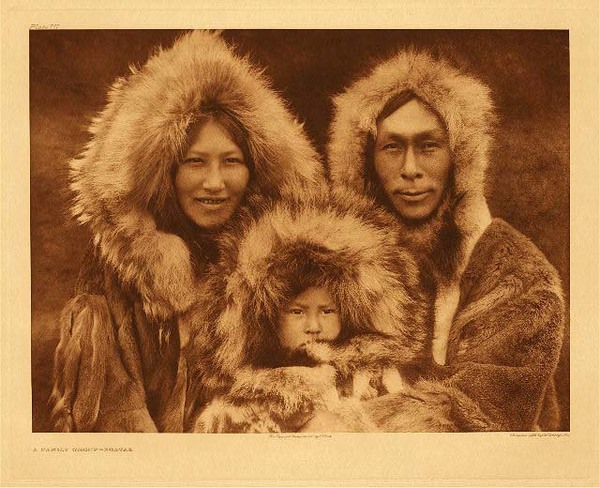 Vintage Photogravure
A happy and smiling Noatak family is pictured here, dressed in heavy fur to be protected from the elements. The features of the Alaskan Natives are unique and this photograph displays the features of both man, woman, and child. Taken by Edward s. Curtis in 1928, this image is on display in our Aspen Art Gallery.

“It has been the aim to picture all features of the Indian life and environment-types of the young and the old, with their habitations, industries, ceremonies, games, and everyday customs. Rather than being designed for mere embellishments, the photographs are each an illustration of an Indian character or of some vital phase in his existence. Yet the fact that the Indian and his surroundings lend themselves to artistic treatment has not been lost sight of, for in his country one may treat limitless subjects of an aesthetic character without in any way doing injustice to scientific accuracy or neglecting homelier phases of aboriginal life. Indeed, in a work of this sort, to overlook those marvelous touches that Nature has given to the Indian country, and for the origin of which the native ever has a wonder-tale to relate, would be to neglect a most important chapter in the story of the environment that made the Indian much of what he is. Therefore, being directly from Nature, the accompanying pictures show what actually exists or has recently existed (for many of the subjects have already passed forever), not what the artist in his studio may presume the Indian and his surroundings to be.” - Edward S. Curtis
View Artist Biography
Back to Thumbnails