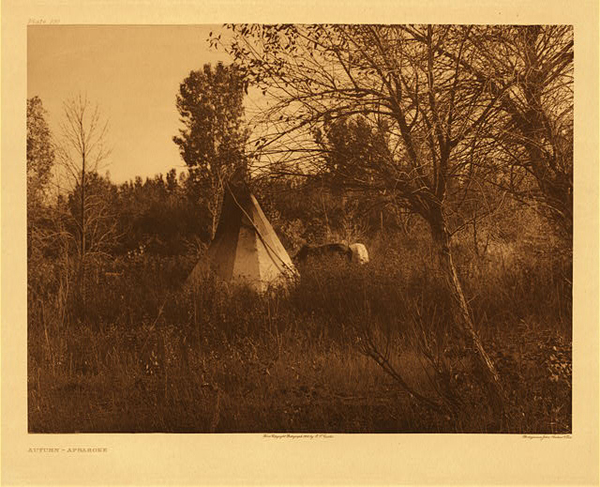 Vintage Photogravure
Description by Edward Curtis: An autumn scene in the valley of Little Bighorn.

A peaceful scene, this Apsaroke camp is tucked into the trees and displays one simple tipi and two horses.

"The country which the Apsaroke ranged and claimed as their own was an extensive one for so small a tribe. In area it may be compared, east and west, to the distance from Boston to Buffalo, and north to south, from Montreal to Washington — certainly a vast region to be dominated by a tribe never numbering more than fifteen hundred warriors. The borders of their range were, roughly, a line extending from the mouth of the Yellowstone southward through the Black Hills, thence westward to the crest of the Wind River mountains, northwestward through the Yellowstone Park to the site of Helena, thence to the junction of the Musselshell and the Missouri, and down the latter stream to the mouth of the Yellowstone. This region is the veritable Eden of the Northwest. With beautiful broad valleys and abundant wooded streams, no part of the country was more favorable for buffalo, while its wild forested mountains made it almost unequalled for elk and other highland game."
View Artist Biography
Back to Thumbnails