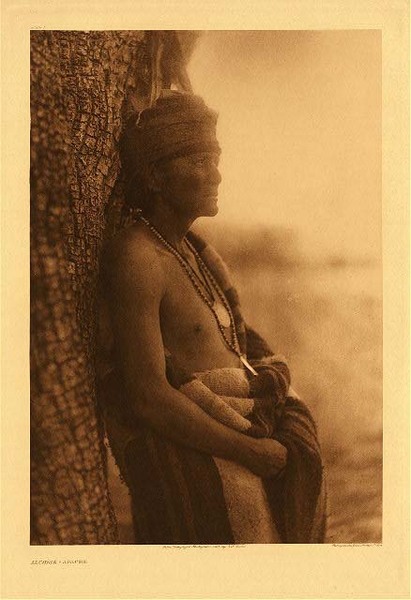 Vintage Photogravure
Description by Edward Curtis: “Chief of the White Mountain Apache. A well-known character, having been a scout with General Crook. Colonel Cooley, who was chief of scouts under Crook, says a braver man than Alchise never lived. He was about twenty-two when Fort Apache, then Camp Ord, was established in 1870, making the year of his birth about 1848. This portrait was made at Alchise's camp on White river in the spring of 1903.”

This photogravure is printed on Dutch Van Gelder and is the 5th plate printed for Edward Curtis’ North American Indian project. The Subject named, “Alchise” is a chief from the White Mountain Apache tribe. Known for his work as a scout for General Crook, Alchise was a fierce and brave warrior.

In this image, Alchise is looking thoughtfully into the distance while leaning against a tree. Similar in dress to the famous “Geronimo” photogravure, he is wearing cloth wrapped around his head which gives a turban-like impression. Around his neck are several pieces of jewelry, including one medallion-like piece. His dress appears to be some sort of striped robe, or blanket, that is loosely tossed around his waist. The slightly bright light from the right of the images gives an atmospheric look and almost blurs the edges of his body. This atmospheric glow gives the piece a lot of emotion and interest.
View Artist Biography
Back to Thumbnails