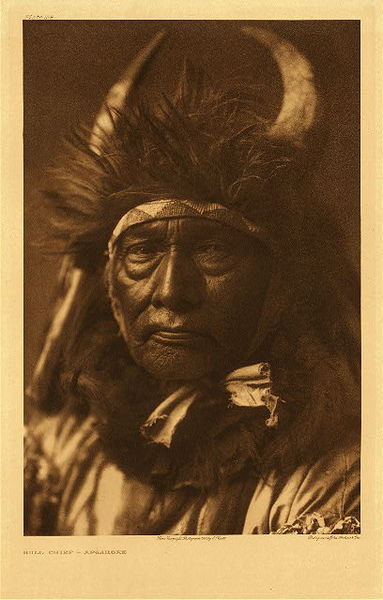 Vintage Photogravure
Instead of a headdress this chief wears two bull horns atop his head and what appears to be shaggy fur as well.

Description by Edward S. Curtis: Born 1825. Believing he could win success without fasting, he joined many war-parties, but always returned home without honor. He therefore climbed Clouds Peak, the highest point in the Bighorn mountains, and there on the bare rocks he stood all day and a night. The mountain-rats ate holes in his robe and a fierce blizzard swept across the peak, so that he could not remain longer. Soon afterward the camp was moved, and he fasted four days and four nights in the southern part of the Wolf mountains; no vision appeared. At this time all the men possessed of an especial desire to count coups, and everybody was fasting. Bull Chief soon endured two more unsuccessful fasts, and then at the head of Redlodge creek, lance in hand and clad only in loin-cloth, moccasins, robe, and a piece of old lodge-cover, he fasted four days and four nights, much of the time in blinding snow. He saw his own lodge and a splendid bay horse standing in front of it. The vision was soon followed by the capture of a tethered bay, his first honor. Thenceforward he very frequently counted coup. Not long after his marriage, a bank of earth fell upon his young wife and killed her; and though he was looked upon with favor by all of the tribe, and many women were hoping to be chosen by him, he sorrowed for the dead girl and determined to go through a form of torture. Two friends killed an old buffalo bull and dragged the fresh head, with a broad strip of skin down the back, including the tail, to the edge of the village. While the people were making merry that night, Bull Chief's heart was sad with the thought of what was at the edge of the camp. Early in the morning he bathed in the river and went to the lodge of Big Shadow, a clansman, and said, "my friend, pierce me." Big Shadow had heard of the buffalo-head, and answered, "Go! I shall come." He directed Bull Chief to bathe again, remove every ornament from his body, and rub himself with sage. The young man did so, and went and sat beside the buffalo-head, after which his clansmen came with three other men. He painted Bull Chief from head to foot with white clay, then pierced the muscles of his back in two places, and to the skewers which he thrust through the slits he attached thongs that were fastened to the nostrils of the buffalo-head. Then he pierced the shoulders, and from the slits hung the shield and tomahawk. He pulled the thongs tight, gave Bull Chief a staff, and bade him arise. While the other three sat behind and smoked, Big Shadow sang and exhorted Bull Chief to be a man and go four times about the camp, which stretched along the river for about half a mile. So he dragged the head and skin along, wailing, while dogs rushed out barking, leaped upon the skin, and jerked the sticks in the slits. Sometimes the skin caught in the sage-brush, and he had difficulty in refraining from turning back. At sunset he went to a hilltop to which Big Shadow had directed him, and lay down, his head between the horns of the buffalo and his feet at the tail, pointing eastward. As day dawned a man seemed to come and stand at his feet, then he turned and departed. Just before the sunrise Big Shadow came. "Last night someone came to you. I know it," he said. "I did not sleep," said Bull Chief; "how then could anyone come to me?" "Someone did come, I know it," persisted the other. "Yes, said Bull Chief, "I will tell you of it." Big Shadow returned to camp, leaving the young man to bathe before coming to his lodge for food. After the faster had eaten, Big Shadow said, "Last night in my dreams I saw a man before you. Why should you conceal it from me?" Then Bull Chief told him how the man had been dressed, and the other said, It is the Morning Star, my father, that came to you." Thereafter Bull Chief dressed as the spirit had been dressed, and he believes that all of his honors and long life are a result of its guidance and protection. Bull Chief counted three coups on Sioux and two on Indians killed by white men.; but the latter are "not good." Three times he captured guns from enemies who were still alive and shooting at him. On another occasion he took two revolvers and a bow from a Sioux. Captured two tethered horses. He never led a war-party from the camp, but four time he led detachments from parties that were turning back, and each time he came home with an undisputed honor. Three times he dismounted in battle and alone held the enemy back. He has a record of having killed eight men-three Sioux, two Nez Perce, one Shoshoni, and two Piegan. Member of the Never Shoots, Packs Game clan, and of the Fox organization. Never accepted the lance of the Fox organization, but was four time placed at the head of the procession as they marched to the dance, a position accorded the bravest man present. Married fifteen times; gave up thirteen of his wives. Father of thirteen children.
View Artist Biography
Back to Thumbnails