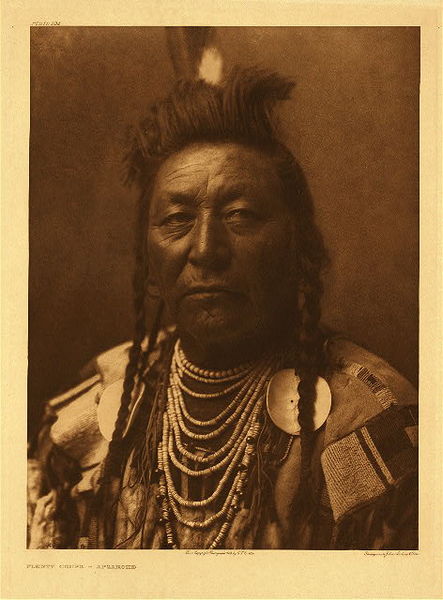 Vintage Photogravure
As indicated by the name “Plenty Coups”, this Apsaroke man has seen and won many battles. Counting Coup is one of the highest honors in Native American culture, and men begin on the war path at a fairly young age. In this image Plenty Coups stares into the camera with distrust. His hair is also indicative of being a part of many battles and perhaps collecting scalps.

Description by Edward S Curtis: Born 1847. Mountain Crow of the Whistle Water clan. When he was about sixteen years of age his brother was killed at Tongue river by the Sioux, and the boy climbed for two days to reach a peak in the Crazy mountains, there to give vent to his grief and to pray for revenge. He addressed the sun: "Father, the enemy have slain my brother. I wish them to cry often for my hand, and in return I give you my finger." Then he hacked off the end of his left index-finger, crying, "Father, my body is clean and pure; I give a portion of it to you. I am a poor young man; take pity on me." "In those days," says Plenty Coups, "no white man had defiled the mountains; the spirits dwelt there and I sought their power." He had at the time already been on the war-path, and now began to take the trail with great frequency, so that at the age of twenty-six he had counted a coup of each kind and was called chief. Subsequently his record was four coups of each of the four sorts-striking the first enemy in a battle, capturing a gun, taking a tethered horse from an enemy camp, and leading a successful war-party-and as no other Apsaroke could equal his achievements he became, on the death of Pretty Eagle in 1903, the chief of the tribe.
View Artist Biography
Back to Thumbnails