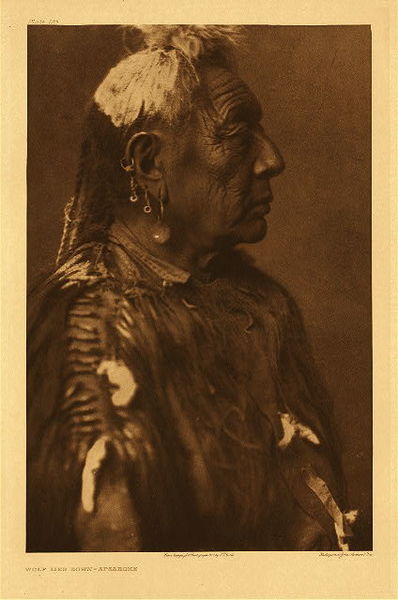 Vintage Photogravure
Wolf Lies Down is of the Apsaroke tribe, this photograph was taken by Edward Curtis in 1908. Staring forlornly to the right, the subject’s heavily lined face is indicative of a long and hard life. He is heavily costumed wearing an interesting head ornament, multiple earrings, braided hair, and a large fur covered shirt.

Description by Edward S. Curtis: Born about 1843. Mountain Crow; Never Shoots, Packs Game clan; Fox organization. Never obtained medicine by vision, but purchased wolf-medicine, paying five hundred elk-teeth. Counted one "dakshe" by leaping over a rocky barrier among the enemy, who were in a deep hole protected by stones and bush-the leap itself was a dangerous feet. Captured one gun and one horse tethered in an enemy camp; led one successful party against the Yanktonai at Fort Peck; was one of the leaders of a party that killed seven Sioux. Once accepted the curved stick of the Foxes, but did not have an occasion to use it, as there was little fighting in the succeeding summer. In the battle with Sioux on Pryor creek, his brother-in-law, One Feather, lost his horse and was surrounded by the enemy; Wolf Lies Down turned back, took him on his own horse, and though wounded in the head made his escape with great difficulty.
View Artist Biography
Back to Thumbnails