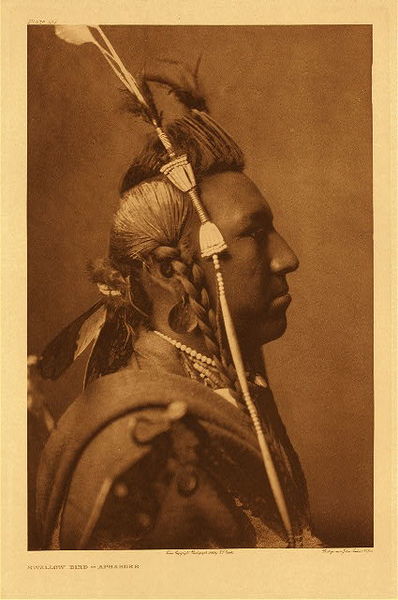 Swallow Bird is photographed in profile here, showing off his strong Apsaroke features. His hair, often seen in this tribe on warriors, is done so that it is very high in the front and braided on either side. His dark skin is in contrast to the slightly lighter brown background.

The Apsaroke enjoyed the climax of their existence during the scant century following the acquisition of horses. Previous to that event their life had not known the fullness that was theirs when they had herds of horses, and firearms had supplanted arrows and spears. Notwithstanding their aggressive, warlike disposition, they never were in serious conflict with the Government, nor did they commit many depredations against white settlers, who, although regarded by them as trespassers, were rarely molested. The Indians captured many horses from early hunters and trappers, but this was to them a legitimate procedure, for these men were intruders on their lands, taking their game, consequently all captures of livestock were regarded as just compensation.

By all observers who have written of them, the Crows have been pronounced exceedingly lax in morals, and while many statements of this sort have been overdrawn, they are certainly an unusually sensual people. Still, as an alien race, we should hardly presume to judge them wholly by our standards and not give them credit for their own customs and codes. They on their part consider some of our customs highly objectionable and immoral.
View Artist Biography
Back to Thumbnails