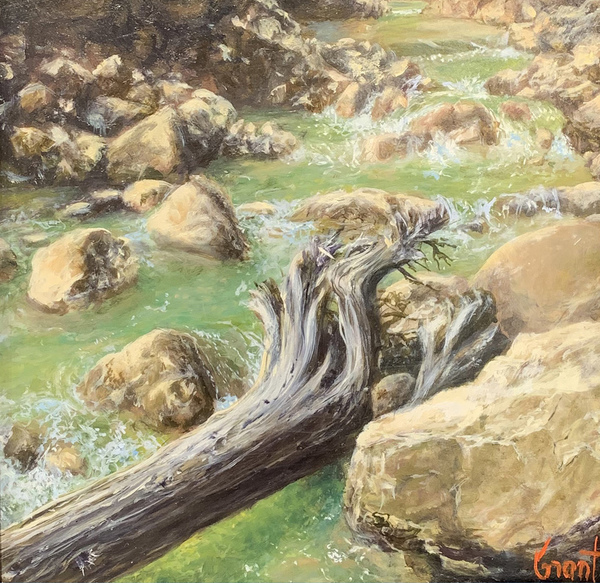 L/R
Darren Grant is an oil painter whose talent is uncommon. He is equally skillful in abstract and natural realism, and even a combination of the two, which he calls Abstralism. He sees these styles as not mutually exclusive, often informing each other, and this versatility has propelled his 30-year career. His flexibility in art mirrors his life path. Born in Long Beach, California on June 12, 1967, Darren has trained as a painter since age 12. His love for art and early talent led him to architecture as a college major. While attending The Art Center College Of Design in Pasadena, Darren excelled in perspective rendering and design. He worked as a designer for an architectural firm in Long Beach for several years before deciding to give painting his full energy in 1993, at age 24.

With the skills of a trained architect and the heart of an artist, he began private oil painting lessons with acclaimed painter and teacher William Martin, who taught in the Classical and Old Master way of oil painting. Darren Grant draws inspiration from artists with architecture backgrounds like himself, such as Michelangelo and Leonardo Da Vinci. He also studies the mid-19th century American landscape artists such as Frederic Church, Thomas Cole, and Albert Bierstadt, known as The Hudson River School. Darren draws the legacies of those artists into his own innate style to create stunning oil paintings for clients and galleries.
View Artist Biography
Back to Thumbnails